Italy hardest-hit since outbreak of COVID-19

Italy hardest-hit since outbreak of COVID-19

Italy has been the hardest-hit country since the outbreak of COVID-19 in Europe, with the highest mortality rate and the most confirmed cases in the region. Local medical analysts say there are multiple factors behind the tragic data.

On Friday, 627 patients died of COVID-19 in a 24-hour span in Italy, the highest leap in fatalities in a single day in the country, bringing its COVID-19 death toll to 4,032, according to official statistics from Italy’s Civil Protection Department. In the previous 24-hour span, 427 people had died in the country.

The current COVID-19 morality rate in Italy stands at about eight per cent, which is higher than the global average. According to the World Health Organisation, as of midnight on Thursday, there were 209,839 confirmed cases of coronavirus and 8,778 deaths worldwide, with the global average mortality rate standing at some four per cent.

Local medical experts told Xinhua that factors such as untested mild cases and a high proportion of the elderly population are among the factors behind the high mortality rate in Italy. Fabrizio Pregliasco, a researcher at Department of Biomedical Sciences for Health at the University of Milan, said that many mild or non-symptomatic cases have not been confirmed due to the insufficient diagnostic capacity in the early stage of the coronavirus outbreak.

Currently, Italy has been intensifying its testing capacity steadily. According to the Italian Ministry of Health, the country had performed more than 180,000 tests nationwide as of Thursday, which are among the highest in the world.

According to a report released by the Italian National Bureau of Statistics in February 2019, Italy’s total population was about 60.39 million as of January 2019, and the population aged over 65 was 13.8 million, accounting for 22.8 per cent of the total population. -Xinhua

The post Italy hardest-hit since outbreak of COVID-19 appeared first on Ghanaian Times. 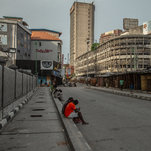 Italy To Test Cristiano Ronaldo, Others For Covid-19