Use of 'Aboboya' must be regulated – NPP activist 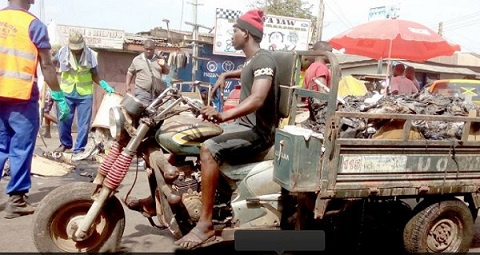 Use of 'Aboboya' must be regulated – NPP activist

Ghana Web
A member of the New Patriotic Party’s (NPP) Communications Team, Nana Kwame Apenteng, believes the use of Aboboya in the country is not regulated.

Aboboya has been a means of transporting garbage from one place to another. But Aboboya riders are beginning to become a nuisance, he asserts.

“We are not saying the use of Aboboya in the country is irrelevant. We are saying they must operate in a structured way,” Kwame Apenteng said during an interview on the Happy 98.9 FM Epa Hoa Daben show.

The NPP communicator said they must be regulated and must be provided with a central area to deposit the garbage because there are some riders who all in the name of "keeping the nation clean” collect garbage and dump it at unauthorized places which do not help in the country’s sanitation. He also said some Aboboya riders tend to heap their vehicles with the garbage that litters the streets of Accra as they ride to the dumping sites.

Kwame Apenteng concluded, “This government is poised to make Accra one of the cleanest cities in Africa.”

Mr. Quartey gave this directive at the launch of “Operation Clean Your Frontage” in line with the road traffic regulations.