Ghana Web
Ahead of the impending Volta Regional elections of the Opposition National Democratic Congress (NDC), Mr Luqman Dawood, an activist of the NDC has through a statement, endorsed the candidature of former North Dayi MP, Hon George Loh, for Regional Vice Chairman.

The NDC Activist chronicled several reasons why delegates must choose Hon George Loh against other contestants.

The impending elections in Volta and Oti region have become necessary following the creation of the new regions.

Hon George Loh contested in the Regional elections held last year and lost to the current regional Secretary, Mr James Gunu. But haven presented himself again to run for the Vice Chairmanship position in the region, many including the NDC Activist Mr Luqman Dawood has called on delegates to consider the perseverance, dedication and commitment of Mr George Loh and vote for him as the Regional Vice Chairman.

The NDC Activist indicated that the presence of Hon George Loh in the Regional Executives Committee would boost the confidence of resource providers and also serve as a serious threat to the ruling NPP in the region and beyond.

He also described him as a pragmatic and honest leader who believe in youth empowerment and mentorship.

He reiterated the need for the party in the region to have a lawyer in the caliber of Hon George Loh “work on all legal matters that may confront REC, NEC, Branches as well as their members”.

The NDC Activist finally appealed to the delegates to vote massively for Mr George Loh as the Regional Vice Chairman to “help bridge the gap between the youth and elderly”.

Read the full statement below;

Over these past weeks, the delegates and I have had the opportunity to observe and evaluate the perspectives and agendas of the various candidates in the upcoming elections. Your honest, pragmatic, and hopeful insight into our party’s problems and needs, and your willingness to examine the issues and listen closely to the public’s questions and concerns, sets you far apart from the other candidates’ expected techniques and talk, and so I am writing today to express my support for your campaign in the upcoming elections and to spread word to others of the value of your policies and abilities.The following are the reasons why we need Hon.George loh in region,

1. The REC needs a blend of a good lawyer to take on the NPP and advise REC.

2. Loh shall promote confidence of the NDC members in REC.

3. Loh’s presence in the REC would also boost the confidence of resource providers.

4. Loh’s presence in the REC is a serious threat to NPP not only in the region but also beyond.

6. Loh shall lead in the work on all legal matters that may confront REC, NEC, BRANCHES as well as their members.

7. Loh shall help reconcile and unite the region.

8. Loh skills include legal, communications and research which is rucial for victory 2020

9. Loh is well connected to the national and the Presidency.

11. Loh is a social democrat who believes in sharing and helping.

13. Loh is available to REC and the entire NDC any time he is needed.

14. Loh shall help to serve the interests of the youth and the elderly appropriately.

15. Loh shall help bridge the gab between the youth and the elderly.

16. Loh is a team player and works smoothly with anyone.

17. Loh is ready to do everything that is good to move NDC forward.

18. Simply,
Loh believes in reward for hard work.he will facilitate opportunities for all.

Victory 2020 is a destination that shall be reached by leaving the comfort zone, by hardwork and perseverance.Hon Loh shall leave his comfort zone just to make sure the NDC reaches Victory 2020,So for Competence
and Effective administration I urge all delegates to go for Hon Loh. 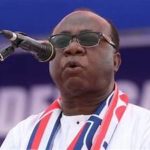