Ghana Web
Ghana head coach, Milovan Rajevac has named his line up for Black Stars game against Morocco in the African Cup of Nations.

The coach has made some significant changes to the team which played Ghana's friendly game against Algeria.

Jojo Wollacott will be in post for the Black Stars with the defense made up of Andy Yiadom, Baba Rahman, Daniel Amartey and Alexander Djiku.

For the midfield, the Black Stars will have the pairing of Baba Iddrisu and Thomas Partey whiles Kamaldeen Sulemana and Joseph Paintsil on the left and right flanks respectively.

The Ayew brothers made of captain Andre Ayew and Jordan Ayew will be in the striking department for the Black Stars.

The Atlas Lions of Morocco defeated the Black Stars last year in a friendly match last year but despite that most Ghanaians are confident that the Black Stars can overcome that setback and beat their Group C opponents.

A win for Ghana in this game would make qualification easier before facing other group opponents Gabon and Comoros. 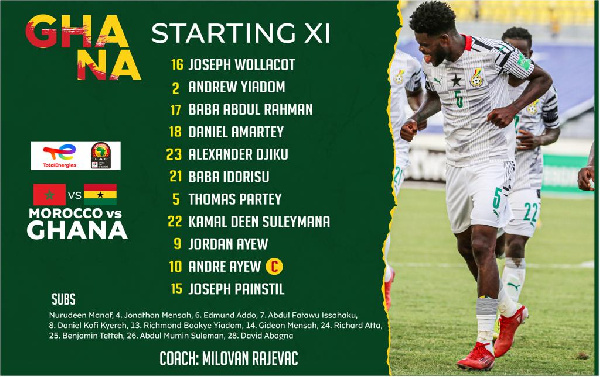