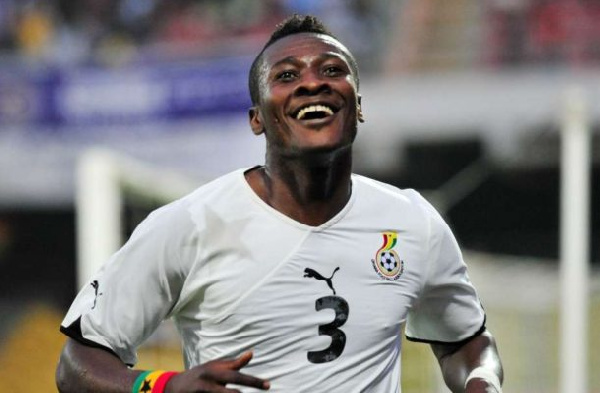 Asamoah Gyan scored the fasted goal at the World Cup 2006

Just as his day of birth is difficult to forget, he scored four goals that will also live with Ghanaians until the end of time.

In total, Gyan scored 51 goals for the Blacks Stars in 109 appearances, an enviable achievement that puts him 6th on the list of most goals scored for an African country and 39th in the world.


Black Stars made their first-ever World Cup appearance in Germany in 2006 and would not want to end it with an embarrassing exit of two straight defeats.

In a must-win game against the Czech Republic after losing 2-0 to Italy in the opening group match, it was 20-year-old Gyan who gave Ghana a bright start.

He controlled Stephen Appiah's sublime pass beautifully with his chest before drilling a left-footed shot to hand Ghana the lead in 2 minutes. The goal would go on to become the tournaments fastest goal.

The equaliser against England

Prior to the 2010 World Cup in which Ghana had qualified for the second successive time, Milovan Rajevac's men engaged England in a friendly at Wembley.

A night the Ghanaian diaspora who were present will never forget. At 1-0 down and about 3 minutes to end proceedings, Gyan produced one of the best goals in his career. Danced his way through the defence before placing it into the left bottom corner with his weaker foot.

The winner against the USA at the 2010 World Cup

Ghana secured a maiden qualification to the quarter-finals with a memorable 2-1 win over the USA.

The match ended one-all in regulation time and thus travelled into extra time. The then Sunderland striker scored the winner in the 92nd minute with a lovely volley and followed up with a trademark dance that later became popular in the country.

The winner against Algeria at the AFCON 2015

At the AFCON 2015, Ghana had lost 2-1 to Senegal in the opening group game and thus needed a win in the second match against an Algeria side that had beaten South Africa 3-1.

Ghana were on the urge of an early exit, 0-0 after 90 minutes and the referee had added 3 minutes. A long ball from Wakaso put Gyan on the chase with an Algerian defender. Gyan managed to get the first touch with the defender on him, sending him into the box but at a difficult angle and the defender still closing in. Sixty seconds left on the clock, that was the only moment to change the game, and he did it spectacularly by firing into the far post. Read Full Story
Advertise Here contact ads[@]ghheadlines.com
Related Items sports soccer
sports soccer