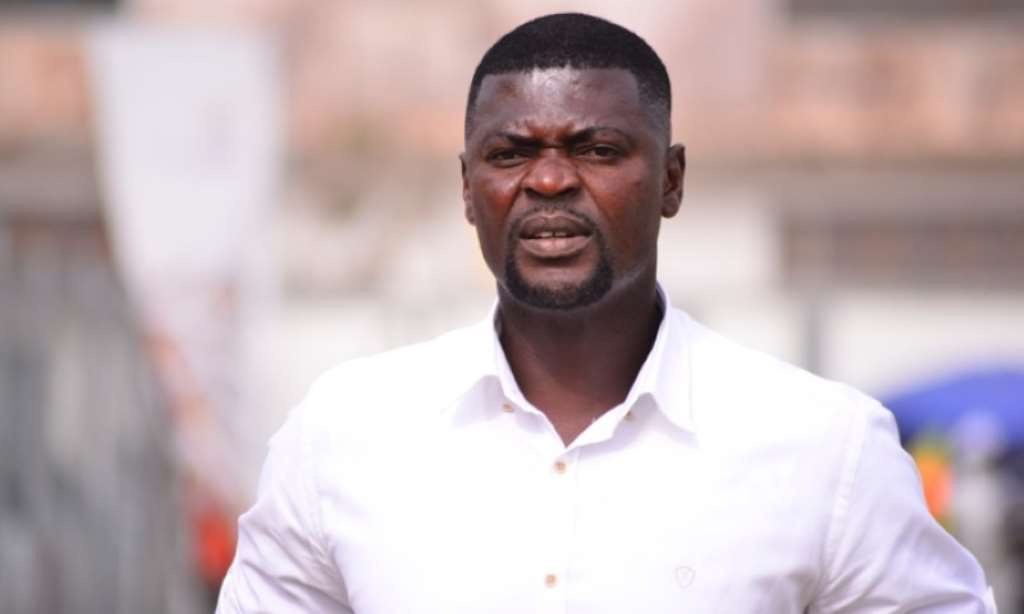 Ghana Web
Every press conference Samuel Boadu has been in since he won the double this season has followed a certain pattern – a pattern of gratitude. The young coach has been extremely grateful to the Phobian family for believing, supporting him and making him feel he could do it for the club even when the odds were stacked against them. “I feel proud as a young coach to win all trophies for Hearts,” he told Pure FM in Kumasi.

“I give the maximum respect to the senior coaches because they have been there and seen it all. Togbe Afede XIV told me he had been tracking me for long and he expressed his belief in me”.

Boadu came in as an unheralded young professional who had no titles to his name albeit guiding Medeama to the top of the Ghana Premier League table twice only for the league to be truncated on those two occasions. Those two Medeama teams he built were organized – a hard nut to crack. Kwasi Donsu, Eric Kwakwa and Malik Akowuah formed a midfield trio that mesmerized teams in the country. A lot of it was Boadu’s work but for some reason, he was never accorded the plaudits for the decent work he was quietly doing in the little mining town in the west.

At his unveiling at Hearts, he sat silently. On many occasions looking like he was in a trance, absent-minded at best. Just there probably thinking “How the hell did I get here?”. Something in between disbelief and perplexity. His face was partly covered in a facemask of course so you could only see his eyes and they were the only part of his body that gave away a sense of silent joy. “I had been looking for this opportunity for quite long and this is the time for me to be part of the Phobia family. I am so so proud of myself to be head coach of Phobia. I will bring my heart out to work extra hard for this club.”

Right from the off, Boadu knew he had taken on a big job. Others said he had drank from the poisoned chalice – suggesting that Hearts of Oak’s trigger happy nature and impatience with coaches would catch up with him and he could go way down the pecking order. Boadu was calm about all of this.

Hearts of Oak had one of the most bizarre seasons in recent history. Not many tipped them to win the league. They had recruited well, started the season under Odoom but things were just not quite right. Odoom was asked to step aside three games into the new season and retake his old role as head of the club’s youth side. Players win and lose football matches, managers carry the cap. It is a sack race that creates as many headlines or worry lines as the games themselves.

The Phobians needed a lift. They needed to start dreaming again so they turned to the man who last gave the club a chance to smile after winning the league title, Kosta Papic. The hope of that ended just as fast as it began.

Boadu’s first game for Hearts was against the West African Football Academy. The team looked a bit more composed. When new managers come in, their first games are always so exciting to watch. Suddenly, everyone wants to give off their best again, there is a breath of fresh air and the fighting spirit is almost always through the roof. It is on the coach to keep that fire burning in the players. Most times it leads nowhere and clubs are usually back where they started. Clubs who often have no patience with coaches end up like this. A sacking carousel until they find the right one, but Hearts wanted a new direction.

Especially after the fans had hijacked their secretariat in Adabraka and threatened not to leave until a right direction for the club was outlined by the board.

So in the WAFA game when he hit four, it wasn’t shocking. He went on to win 13 points out of his first 7 games. He had potentially lost 8 points and it got the Hearts fans talking – a few of them even doubting. A time in the season where he has admittedly called a difficult time.

“When I came to this club, it was just one week before I started playing matches so it was very difficult to get my philosophy across. That was where you could see that we were struggling but I knew that things will change.”

Then he lost in Dawu to Dreams FC. That was his defining moment.

“When I lost that match, I don’t know what happened to me but I was not myself and I decided that I will not lose a game again. I found out the problem that day. We missed a lot of chances and other things so I had to correct all those mistakes.” He said.

“After that match, I listened to the media and I just told myself that they do not know what is going to happen. It helped me a lot because when you go down and people complain, it means there is something in you that you can bring out” he added.

After that Dreams game, it was all cruise control for Hearts. They went unbeaten for 12 games including a win against rivals Kumasi Asante Kotoko in Accra.

Samuel Boadu won Hearts of Oak their first major trophy in 12 years. His idea to bring in Caleb Amankwah and Techiman Eleven Wonders talisman Salifu Ibrahim proved timely. It was just what Hearts needed. A man whose drive will be good enough to propel the Phobian attack and lead them to scoring many goals. Ibrahim’s dink passes over the top of the defence, Barnie’s surging runs and Obeng Jr’s positioning gave the Hearts attack stability. Boadu had installed solid fundamentals and a psychotic competitive drive.

“With the psychological aspect, I just tell them they can do it. Why are they down? They should buck up. I tell them that to bring out what is in them and if they do not do it, I am going to bring it out myself.”

Boadu’s work with young players especially what he did with Afriyie Barnie was evident from the off. The young attacker had become lethal again, he was everywhere on the pitch and was playing with consummate confidence. And it was all Boadu’s doing. To put the performance of Barnie into perspective, let’s get back to how it started for Boadu. He began at Division 2 side Shooting stars Football club in Kumasi before moving to Asokwa Deportivo where he thrived. He was asked to join Medeama as a youth coach and scout which he accepted wholeheartedly. A few years after satisfactory work he moved into the Head Coach role and became one of the most promising young coaches in the country. Is he the best coach in the country? Hearts fans have trumpeted this since the FA cup final and maybe they could be right.

Boadu is Hearts of Oak’s messiah. Before him, Hearts had not won the league since 2009 and the double since the days of Jones Attuquayefio in 2000. He beat Kotoko in Accra and smashed some of Hearts very tricky opponents.

He hasn’t done all of this alone. If Boadu is having a party, Hamza Obeng is definitely on the guest list. Obeng meticulously monitors teams and has several meetings with Boadu before they both map out a strategy to approach the game. The two are quite similar to Brian Clough and Peter Taylor in Nottingham Forest’s Champions league winning years of 1979 and 1980.

There’s a good feel about Hearts now. Many of the club’s fans believe it is a facsimile of the glory days of the early 2000s. Africa beckons and it is serious business for Hearts. The Phobians are not there yet but the energies of the club’s historic double this season is what they believe will guide them there and of course the Boadu factor. “I am going in there to meet some of the best coaches in Africa and I am happy. This is what I want”

There’s still a lot more the man has to learn though. Game management – especially in the game against Legon Cities, substitutions and a the perfect demeanour for approaching press conferences. He is a man who is always learning and wants to improve.

2021 will always be the Hearts of Oak year. Boadu might not know what hit him or the importance of what he has led the team to achieve this season and so will the Hearts fans who struggled to believe in their darling club again until this year.