The seven-member panel, presided over by Chief Justice Kwasi Anin Yeboah, had asked lawyers for the parties in the case to file their closing written addresses.

Issues to be determined by the Supreme Court include whether there is any legal grounds for the petition and whether or not President Akufo-Addo met the Article 63(3) threshold set out in the 1992 Constitution.

Article 63(3) stipulates that a presidential candidate must obtain 50 per cent of the total valid votes cast plus one vote before the candidate is declared president elect.

The Petitioner, in his bid to have the Electoral Commission Chairperson, Mrs Jean A. Mensa, mount the witness box, had his applications dismissed by the Supreme Court.

In the case of the two respondents, they declined to testify after the Petitioner had closed his case.

Mr Akoto Ampaw, the Lead Counsel for the Second Respondent, had told the apex Court that: “We do not intend to call any witnesses to satisfy the burden of proof.”

In the case of the EC, Mr Justine Amenuvor, the Lead Counsel for the Commission, held that there was sufficient evidence before the Court after the Petitioner had called in three witnesses and closed his case.

Quoting the Court’s Rules and Constitutional Instrument (CI 87), Mr Amenuvour said: “We close our case. We are not calling any witnesses, we wish to rely on our witness statement filed by the first Respondent (EC).’’

The Lead Counsel for the Petitioner, Mr Tsatsu Tsikata, argued that the EC did not have it open to it to take the course it had proposed to the Apex Court.

He said the EC could not evade cross examination, adding that the course it had taken did not form part of the case management during trials.

Former President Mahama proceeded to court on the basis that no candidate won the 2020 Presidential Election and, therefore, the declaration of President Akufo-Addo as the winner by the EC Chairperson was "null and void," unconstitutional and of no legal effect.

He argued that, per the results, no candidate obtained more than 50 per cent of the total valid votes cast as required by Article 63 (3) of the 1992 Constitution.

Mr Mahama said per the figures, the actual percentage for President Akufo-Addo minus Techiman South ought to be 50.098 per cent and not 51.595 per cent as announced by the EC Chair.

He argued that his percentage minus Techiman South should be 46.26 per cent and not 47.366 per cent.

Mr Mahama said it was erroneous for the EC to state that even if all the votes in Techiman South were added to the Petitioner's votes, President Akufo-Addo’s votes would still remain the same at 6,730,413, now yielding 49.625 per cent whiles his (Petitioner) would increase to 6,324,907, now yielding 46,768 per cent.

Accordingly, the EC Boss’s claim that adding all the 128,018 votes in Techiman South to the votes standing in the name of the Petitioner would not change the results was clearly wrong.

President Akufo-Addo and the EC, in their respective responses, argued that the petition was incompetent, lacked merit and raised no reasonable cause of action.

They contended that the petition did not meet the requirement of a Presidential Elections Petition as stated in Article 64(1) of the 1992 Constitution and same was, therefore, incompetent.

They held that was because the petition made no allegations of infractions in the election at any of the 38,622 polling stations and 311 special voting centres.

The EC argued further that the petition was incompetent because it did not contest "the lawfulness of votes," obtained by any candidate at any polling station where the election was held.

It, however, averred that the EC corrected the errors on December 10, 2020, and even stated that "the corrections and clarifications did not affect the overall results as declared."

The EC, therefore, held that; “Mr Mahama's deliberate reliance on the figures declared on December 9,2020 to make a case that President Akufo-Addo did not obtain more than 50 per cent of the valid votes cast was misleading, untenable and misconceived."

President Akufo-Addo said the corrections by the EC on December 9 were done within the powers of the EC and same did not breach any law or statute. Read Full Story
Advertise Here contact ads[@]ghheadlines.com
Related Items news
news 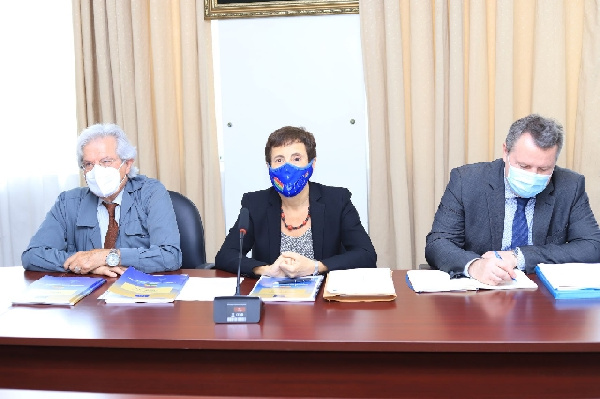