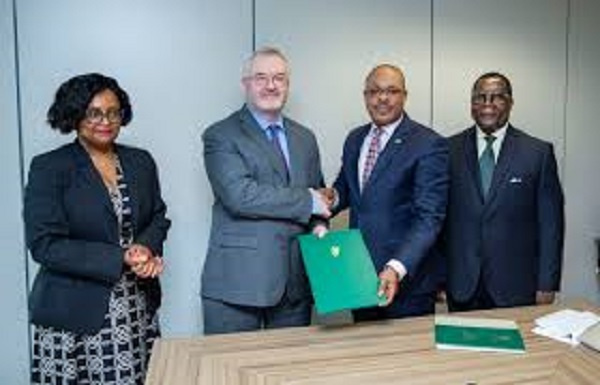 Ghana Web
Ireland moves a step closer to becoming a member of the African Development Bank Group after a government delegation deposited ratification instruments during an official visit to the Bank’s Abidjan headquarters.

“For us, it marks the final moments of our decision to become a member of the African Development Bank Group. It’s been a long road, but a very successful one. We are excited that we are at the end,” said Ryan after submitting the documents.

“Africa has been one of our key targets for development cooperation, so joining the Bank gives us the opportunity to work with the continent and share knowledge in areas such as financial technology services, energy and climate change, among others,” he said, indicating that Ireland would complete the process very shortly.

Ireland’s application to join the African Development Bank Group was approved during the Annual meetings of the Board of Governors of the Bank Group in Malabo, Equatorial Guinea in June 2019.

Depositing the Instrument of Ratification of the Agreement Establishing the African Development Fund (ADF) marks an important step in the process, Vice-President for Finance, Bajabulile ‘Swazi’ Tshabalala noted.

“The participation of Ireland will provide many partnership opportunities for Africa’s development, particularly in the Energy, Climate Change and Agri-food sectors. Additionally, Ireland is now a knowledge economy, which we as a Bank, are looking at in terms of future development on the continent, “Tshabalala added.

The group will spend the next two days in Abidjan to meet with various Bank departments and teams and to learn more about the Bank’s operations and strategies.

The Bank’s Secretary-General, Vincent Nmehielle and General Counsel, Godfred Penn welcomed the representatives and received the Instrument of Ratification, a major administrative step in admitting Ireland as a state participant in the African Development Fund. Director for Resource Mobilization and Partnerships, Désiré Vencatachellum and Victor Oladokun, Director of Communication and External Relations also participated in the meeting.

Ireland’s “Strategy for Africa to 2025” includes a commitment to collaborate with the key financial institution on the continent; as well as to explore new partnerships to support policy development and programme implementation; and deepen engagement in blended finance mechanisms for job creation.

The membership process for joining the Bank Group includes signing the Agreements establishing the Fund and Bank, deposit of the instruments of acceptance/approval of the Fund and the Bank agreements, and the payment of the initial subscriptions to the Fund and capital stock of the Bank.

The rules also require that a non-African country be a state participant in the ADF, the concessionary lending arm of the Bank, before becoming a member of the Bank. Ireland will become the 81st member of the Bank Group, once finalized. Read Full Story
Advertise Here contact ads[@]ghheadlines.com
Related Items news
news

I didn’t close radio stations: See NCA to get back on track -Akufo-Addo to owners