Africa will take off when women are empowered economically – Adesina 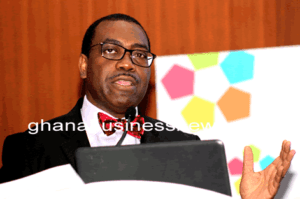 Africa will take off when women are empowered economically – Adesina

“Women run Africa and nobody can fly with one wing, so when Africa fully empowers all its women economically, politically, socially and financially, Africa will take off like a jet,” he said.

The AfDB President said this when he led a team from the Bank to inspect the Pokuase Interchange project on Wednesday.

The Pokuase Interchange project was jointly funded by the AfDB with 84 million dollars and the Government of Ghana with about 11 million dollars and kicked off in July 2018, to promote sustainable economic growth, convenience and safe transportation for motorists.

It was opened to traffic in July 2021 by President Nana Addo Dankwa Akufo-Addo.

Dr Adesina, speaking on other components of the project like rehabilitation of the Pobiman Women’s Group Centre to train women in pastry, bread baking, soap and bead making, and the rehabilitation of the Manchie Gari Factory for the processing of cassava into gari and starch, encouraged the Government to empower more women.

He said that could make the nation achieve her targets and a positive milestone in socio-economic development.

Mrs Selina Avevor, the Assembly Member for Kuntunse Electoral Area, Ga West Municipality, expressed gratitude to the Government for its interventions in promoting women’s development in the project area.

Mrs Avevor, also the President of the Pobiman Women’s Association, appealed to the Government to complete the phase two of the Women’s Group Centre project it had initiated to promote the training of more women in vocational skills.

She said the Association had currently trained more than 40 women in the Municipality and stated its readiness to train more with government’s support.

The post Africa will take off when women are empowered economically – Adesina appeared first on Ghana Business News.