An unemployed man, who allegedly falsified an account and stole a sum of GH¢39,422.00 has been granted a GH¢50,000.00 bail with two sureties by an Accra Circuit Court.

Mr Joseph Tettey, 25-year-old, was alleged to have falsified entry in the daily susu ledger book belonging to ST. Margaret Mary Cooperative Credit Union and stole from the Union in the month of March 2022 at Dansoman in the Greater Accra region.

The accused pleaded not guilty for both charges levelled against him.

The Court presided over by Mrs Susana Eduful directed that one of the sureties must be a public servant, who earned not less GH¢2,000.00 a month.

The Prosecution led by Inspector Ebenezer Teye-Okuffo told the Court that the complainant, Mr Michael Nkrumah, the Manager of St. Margaret Mary Cooperative Credit Union, and the accused both lived at Dansoman, a suburb of Accra.

It said the accused used to work with the Credit Union as its Office Assistant and in the month of March 2022, in the course of his work, forged receipts and ledger books and stole an amount of GH¢39,422.00.

The Prosecution said in July 2022, a five-member ad hoc Committee was formed to look into the actions and inactions of the accused person.

During the Committee’s sitting, the accused was invited, where he admitted to have stolen the money and along the line refunded GH¢13,000.00 to the Credit Union.

It said the complainant lodged a complaint on December 5, 2022, with the Dansoman Police and subsequently submitted an audited report to that effect.

“The accused was arrested on December 6, 2022, for investigation and was later charged with the offences and arraigned,” it said. 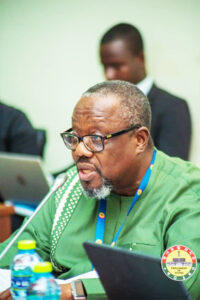