The National Road Safety Authority (NRSA) has called on the public to report any act of misconduct by staff of the Authority including bribery to the Road Safety Information Centre for appropriate redress.

It asked the public to do so by calling 194 on all networks as a whistle-blowing tool adding that it would not hesitate to take drastic measures against persons, including staff that undermines its reputation.

This was contained in a press statement issued by the NRSA following a publicised report which named staff of the Authority as being highly involved in corruption.

It was the outcome of a survey undertaken by the United Nations Office on Drugs and Crime (UNODC) in partnership with the Commission on Human Rights and Administrative Justice (CHRAJ) and Ghana Statistical Service.

The Authority, according to the statement, was highly concerned about the reputational consequences of the report.

To this end, it said, it would interrogate the report to influence remedial actions with policy and public support to cure the negative perception.

Additionally, the statement said, the Authority would further engage the publishers to get further insights into the nature of interviews and evidence to assist immediate efforts to reverse the negative perception.

It explained, however, that the nature of the Authority’s operations does not put officials of the Authority in a position to solicit payment in exchange for the promise of providing a public service as suggested by the report.

The statement said the NRSA was of the belief that an identity gap by sections of the public on its personnel might have influenced the perception.

It does appear that the public relates all such individuals wearing Road Safety-branded paraphernalia and their conduct to the Authority, which mayhave influenced this negative public perception,” the statement noted.

The post NRSA urges public to report misconduct of its staff appeared first on Ghanaian Times.

‘Report misconduct of NRSA officials to Information Centres for redress’

Public urged to donate blood to save lives 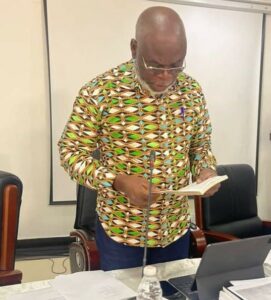