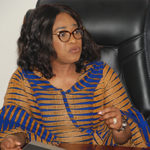 A Nigerian woman who used photographs of Ministers of Information, Foreign Affairs and a Deputy Minister of the Interior to create different Facebook accounts to defraud unsuspecting victims of GH¢10, 277.00 appeared before the Accra Circuit Court on Friday.

Vivian, 31 and her husband Prince Joel, now on the run, were charged with six counts of false pretence and defrauding by false pretences.

The accused used the photos of Mr Kojo Oppong Nkrumah, the Minister of Information, Ms Shirley Ayorkor Botchwey, the Minister of Foreign Affairs and Henry Quartey, a Deputy Minister of the Interior by falsely pretending that they could secure employment for victims at the Tema Oil Refinery, Ghana Gas Company and COCOBOD.

Appearing before Justice Emmanuel Essandoh, a High Court Judge, sitting with additional responsibility as a circuit court judge, her counsel, Abdul Mumuni argued that his client was a victim of circumstances and asked the court to grant her bail.

He said the money was then transferred to another MTN mobile money number registered in Vivian’s name.

Sgt. Sarpong said the ministers got wind of the activity of the accused and reported them to National Security.

The Prosecutor told the court that National Security traced the accused to their house in Ashaiman, Jericho, and arrested Vivian, but Joel managed to escape.

He said a search conducted in the room of accused revealed six mobile phones including three mobile money numbers used by the accused to receive money from victims.

Sgt. Sarpong told the court that police obtained an order from the court to conduct forensic examination on the phones.

He said after examination, one of the numbers was found to be registered in Vivian’s name which was the number used to receive cash deposits from other mobile money accounts.

The prosecutor said Vivian admitted being the owner of one of the MTN numbers used to transact the alleged criminality.