Mali’s military commander Assimi Goita, who removed a transitional president and prime minister last month, has been sworn into office as the new interim president despite facing a diplomatic backlash over his second power grab in nine months.

“I swear before God and the Malian people to preserve the republican regime… to preserve democratic gains,” the 37-year-old military leader, who who was dressed in full military regalia, said after being inaugurated at a ceremony in the capital Bamako on Monday.

Goita dismissed civilian interim President Bah Ndaw and Prime Minister Moctar Ouane on May 24 after accusing them of failing to consult him about a cabinet reshuffle that would have replaced the defence and security ministers – both military officers.

Former colonial power France suspended its cooperation with the Malian military and the African Union announced Mali’s “immediate suspension” from the pan-African body in the wake of the coup.

Goita has promised to conduct the elections as scheduled by the previous government.

Mali coup leader due to be sworn in as president 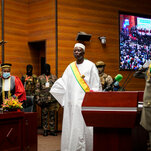