President in crunch meeting with ministers over galamsey

President in crunch meeting with ministers over galamsey

A crunch meeting was called by the President, Nana Addo Dankwa Akufo-Addo, which involved all the 16 Regional Ministers to discuss the revived fight against illegal mining, known as galamsey.

Held yesterday at Jubilee House, the crucial meeting was a follow up to the recently held maiden national consultative dialogue on small-scale mining.

The meeting, which took place behind closed doors, is believed to have discussed key measures the Regional Ministers could adopt to ensure they won the fight in their respective regions.

This paper can report that all the 16 regional ministers were present at the meeting. Also present were the Ministers for Lands and Natural Resources, Interior, Defence and National Security.

Also, the Chief of Staff, Madam Frema Akosua Osei Opare, and other officials of the Presidency were in attendance.

Earlier yesterday, before the meeting, the government had issued a statement on the President’s new directive, which took effect the same day, to remove persons and logistics involved in mining in the country.

The Information Minister, Kojo Oppong Nkrumah, issued the statement, which also announced that the operation, which began on the River Pra in the Central and Western regions, involves 200 officers from the Ghana Armed Forces.

He said: “President Akufo-Addo has authorised the Ghana Armed Forces to commence an operation to remove all persons and logistics involved in mining from Ghana’s water bodies,” said the statement, signed by Kojo Oppong-Nkrumah, Minister for Information.

“The operation, which started on the River Pra in the Central and Western regions of Ghana, involves 200 officers of the Ghana Armed Forces,” added the statement.

It explained that the President’s instruction was in line with the resolutions reached at the recent stakeholder dialogue on small-scale mining, to ensure that mining in water bodies was halted immediately.

The above move, which would need the support and collaboration of the regional ministers, who head the security councils in their regions, was something the meeting elaborated on yesterday.

Though the meeting was not open to the media, the Minister for Lands and Natural Resources, Samuel Abu Jinapor, made a brief remark, which the press captured, before they were respectfully asked to excuse the main meeting.

The Minister used the opportunity to clarify a directive of the President, through the Ministry of Lands and Natural Resources, had issued to suspend all prospecting in forest reserves.

According to him, the directive would not take a retroactive effect. A clarification, he said, was important owing to the confusion created in the public space.

He reiterated that, “The first directive the President asked us to issue was that moving forward the Forestry Commission should not issue forest entry permits for purposes of mining in the forest reserves.”

He explained that the process was such that the final permit one required in other to be able to mine in the forest reserve was the Forest Entry Permit, “and so, as from, I think about two weeks ago, there cannot be fresh mining in forest reserves.”

He continued: “If you have had a mining lease, you will have a forest entry permit before this instruction was given, and so you are not affected. So, the directive doesn’t take retroactive effect…”

On the second directive, he reiterated that, under the pretense of prospecting and reconnaissance people mine, as such the directive was to halt that as well.

Before ending his remarks, the Minister said by the time the meeting was over, all the regional ministers would be given a list of companies holding mineral rights in forest reserves.

“So, after this [meeting] you will be armed with the companies whoch have prospecting licenses, those who have reconnaissance licenses, and those who have mineral rights of forest reserves,” he ended.

The post President in crunch meeting with ministers over galamsey appeared first on The Chronicle Online. 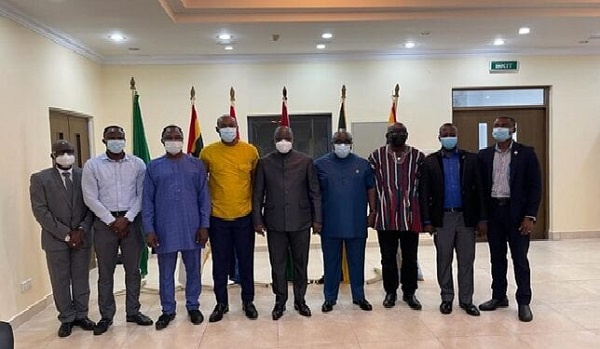