Editorial: Is the GMA trading the health of Ghanaians for money?

Editorial: Is the GMA trading the health of Ghanaians for money?

The Chronicle, on Monday and Tuesday this week, carried an exclusive story about the inclusion of Triclocarban, a harmful chemical component, in the production of antiseptic soaps, especially Camel, Medisoft and Santex. Triclocarban, according to our investigation, has been banned in the United States of America after soap producers failed to convince the authorities that it was not harmful to human beings.
This, ban according to our research, was carried out in 2017 by the American Food and Drugs Agency. We are not scientists, but we understand that in the scientific world, most of the research findings are published and accessible to all who want to know. The Chronicle, therefore, finds it very difficult to comprehend the basis upon which a respectable organisation like the Ghana Medical Association (GMA) decided to endorse a product that has a harmful content for Ghanaians to buy and use.
According to the story under reference, the GMA has endorsed Camel Antiseptic Soap, with some of its officials even going on air to promote it, as good for use by Ghanaians, even though this particular product contains Triclocarban, which is very dangerous for humans use. To us, this is not only sacrilege, but also unprofessional, especially when the GMA does not only have its logo on the product, but actually signed a contract with the producers where money possibly changed hands for the latter to produce a harmful product for Ghanaians to utilise.
Read what PZ Cussons Ghana, producer of Camel Antiseptic soap is saying: The Ghana Medical Association has endorsed the Camel and Carex brand since 2012. This relationship is duly regulated by a contract signed by the leadership of GMA on the one part, and directors of PZ Cussons on the other part. By the contract under reference, PZ Cussons Ghana Limited has rights to use the GMA’s name and logos on our product packaging and in our media communications.”
Interestingly an official of the GMA is reported by a news portal as saying, after our publication, that at the time the medical professionals endorsed the products, Triclocarban had not been classified as a harmful or dangerous chemical component. According to the said official, having realised the harmful nature of the chemical component, the GMA is now taking steps to recall the products from the market.
Granted that what the GMA is claiming that at the time it endorsed the products, Triclocarban had not been classified as harmful is true, when did they realise that the product is harmful and now want to withdraw them from the market? If The Chronicle had not done the story, would they have come out to now concede that the product is harmful and must be withdrawn from the market?
All the arguments being advanced by the GMA regarding the issue at stake are clear cases of afterthoughts. They have endorsed a product that is injurious to the health of Ghanaians, and they must be called to answer for it. The health of the people should, and must, always supersede private or individual interests. Proper patriotic Ghanaians will certainly not trade with the health of the poor man or woman for money, which the GMA seems to have done.
Apart from the GMA howler, The Chronicle is equally surprised that both the Ghana Standards Authority (GSA) and Food and Drugs Board (FDA) also failed to provide proper supervision of these products.
The GSA, in particular, said at the time some of these products were approved, they did not contain the dangerous Triclocarban. This means the producers might have smuggled the chemical solution into the product and are selling them to unsuspecting consumers, yet the supervising authority did not notice this.
This is more than serious and tells a story of weak supervision by the institution that has been created by law to protect the interest of Ghanaians. The Chronicle can reference instances where the GSA and FDA have recalled some products from the market. What happened that in this particular case nothing has been said about it until The Chronicle came out with the story?
We admit that sometimes unregistered products are smuggled through unapproved routes into the country. In such circumstances, nobody can blame the supervising authorities, even though proper monitoring of the market would have exposed these smuggled products.
But, in the case under reference, Camel and Medisoft soaps were registered here in Ghana, and therefore, ought not to have escaped the radar of the FDA and GSA.
Clearly, if this is the way the GSA and FDA are going to operate, then there is danger ahead of Ghana. Knowing these institutional shortcomings, people who set their eyes on money than the health of fellow human beings can easily change the contents of products that have already been approved, and use fake or harmful chemical components to produce the same products at a lower or cheaper cost and sell to Ghanaians.
The Chronicle is, therefore, calling on the leadership of the GSA and FDA to sit up before somebody exploits their weakness to unleash havoc on this country. It is for the safety of Ghanaians that is why they are paid those fat salaries at the end of every month, and they must, therefore, not disappoint the people. What has happened should be a wakeup call on all of them to revise their modes of operation.

The post Editorial: Is the GMA trading the health of Ghanaians for money? appeared first on The Chronicle Online. 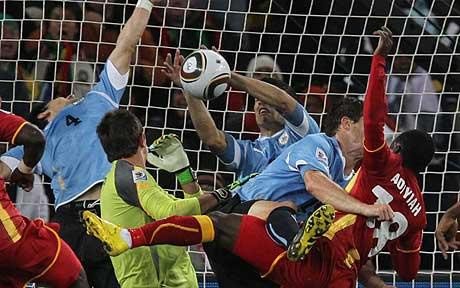 GMA commemorates ‘Day of the Seafarer’

Editorial: The political madness must stop!

Editorial:  KNUT SHS brouhaha: Interdiction is good, but the truth must be told

Editorial:  KNUST SHS brouhaha: Interdiction is good, but the truth must be told

Editorial: Is Ghana Ready For An Earthquake?

Editorial : COVID-19 pandemic demonstrates the importance of hygiene and sanitation

Teleworking is not working for the poor, the young and the women