Gold Fields presents items worth US$29,000 to Apiate victims 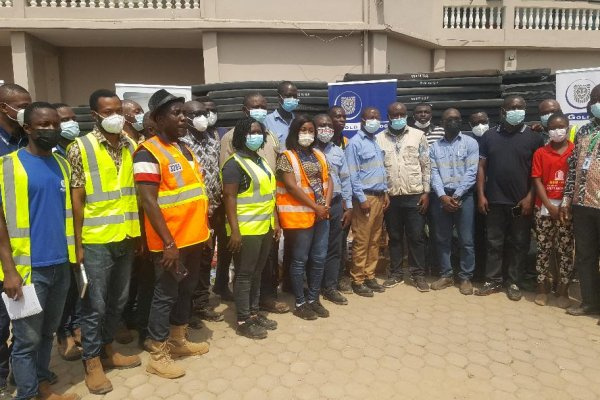 Gold Fields presents items worth US$29,000 to Apiate victims

Ghana Web
Gold Fields Ghana Limited has donated essential items worth US$29,000 to support persons displaced by the explosion at Apiate in the Prestea Huni-Valley Municipality on Thursday.

Mr Robert Siaw, the Regional Manager for Community Relations, made the donation on behalf of Gold Fields at the Saint Michael Catholic Church Parish Hall at Bogoso.

Mr Siaw noted that Gold Fields was saddened by the unfortunate incident and the donated items were to offer immediate relief to the victims.

He said the top executives of Gold Fields decided to offer support to the affected persons.

"We came with a team of medical officers and our Safety and Protection Services managers. They will conduct a quick survey to ascertain the immediate needs of the victims,” he said.

Receiving the items on behalf of the victims, Dr Isaac Dasmani, Municipal Chief Executive of Prestea Huni-Valley, expressed gratitude to Gold Fields for the prompt response and goodwill.

“This kind of donation has come at a time that the people actually need them most," Dr Dasmani said.

He said the Municipal Assembly appreciated Gold Fields’ continuous support over the years.

Dr Dasmani gave the assurance that the items would be distributed to the victims and appealed to other organisations and philanthropists to come to the aid of the affected persons.

Vice President Bawumia, Friday, led a government delegation to the community and commiserated with the bereaved families and the injured.

He said the government would take care of the medical bills of the injured while efforts were ongoing to rehabilitate and rebuild temporary houses for those affected.

The Vice President, on behalf of the government, donated GHc200,000 to the bereaved families for their upkeep and presented assorted items, including mattresses, rice, cooking oil, and toiletries to over 300 persons displaced by the explosion.

Meanwhile, the Minister of Lands and Natural Resources, Mr Samuel Abu Jinapor, has directed the Chief Executive Officer of the Minerals Commission to interdict the Chief Inspector of Mines, Mr Kofi Adjei, over the Apiate explosion.