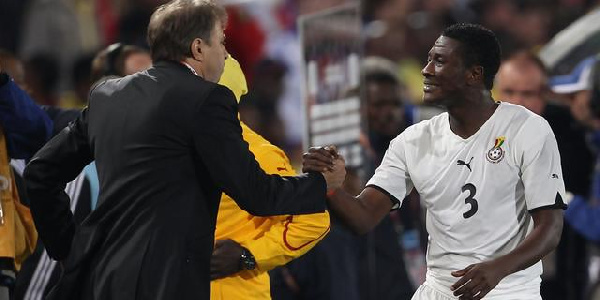 Black Stars are winless in 2021 AFCON

Ghana coach, Milovan Rajevac has hinted that he does not have a player like Asamoah Gyan in the current Black Stars squad at the 2021 Africa Cup of Nations in Cameroon.

Asamoah Gyan, who is currently doing punditry work for South African TV station Supersport after being left out of the Black Stars squad for the AFCON due to his inactiveness in over a year.

The former Sunderland striker who is Ghana’s all-time top scorer was very instrumental in Milovan Rajevac success in his first stint with the Black Stars when the Serbian trainer played in the AFCON final and the FIFA World Cup quarter-finals.

The Black Stars have been struggling with goals since Gyan’s exit and ahead of Ghana’s must-win game against Comoros, Milovan Rajevac has eulogized the African football legend.

Speaking ahead of the must-win game against Comoros, Milovan Rajevac has sort to ask Ghanaians to lower their expectations as he told the press that he doesn’t have a player mould in the calibre of Asamoah Gyan in his team.

“We don’t have the same team like 2010. Not enough time for preparations. We don’t have a player like Asamoah Gyan,” Milovan Rajevac said at his pre-match conference.