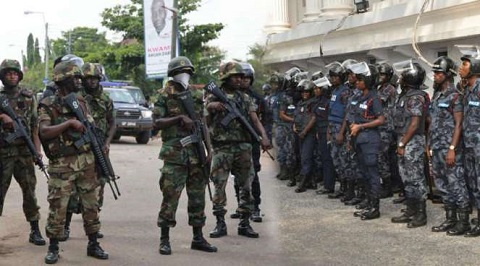 Ghana Web
There is a curfew in Bawku and its environs

REGSEC banned the wearing of smocks in Bawku

The Municipal Chief Executive of Bawku, Amadu Hamza, has disclosed that security personnel in the Upper East Regional town have been given shoot-to-kill orders against people threatening the fragile peace in the Municipality.

“In fact, [when] the soldiers and the police come out, they are coming out fully; they’ll shoot and kill anyone they see on the road trying to disturb the peace of Bawku.

“They have the power to do that [shoot and kill] and so while they do that, you don’t sit somewhere and say it’s against human rights.

"Go to the court and face the soldiers, they will also reach in the court because minimal use of force is allowed in international law,” Hamza stated on Binduri- based TV station Maxx Empire TV on Wednesday (12 January).

Two individuals were shot dead in a renewed clash in Bawku in the Upper East Region on January 10, 2022.

The Municipal Chief Executive of Bawku, Hamza Amadu, who confirmed the news to Asaase News, said one of the victims died on Monday evening whilst the second person died on Tuesday.

He adds the police have commenced complete investigations to fish out individuals who carried out the shootings.

“We are yet to know the individuals who carried out these shootings, and that’s why the police are into a full investigation to unravel the people behind these incidents. I don’t think this is an act of terrorism; it is definitely part of the conflict. With the incident that happened last night (January 10), two people were arrested and are currently in police custody,” Amadu stated.

Last Monday, January 10, 2022, the Regional Security Council (REGSEC) banned men from carrying their fellow men on the same motorcycle in the Bawku Municipality.

The directive was enforced after a critical examination of the security situation in Bawku.

A press release to that effect noted that women were allowed to carry fellow women only on the same motorcycle.

The Ministry of the Interior in November 2021 imposed a dusk to dawn curfew on the Bawku Municipality and its environs in the Upper East Region following renewed chieftaincy disputes in the area.

According to the Minister, the imposition of the curfew resulted from the threat of insecurity in the area.

The ministry subsequently placed a total ban on all persons in the afore-mentioned communities and their environs from carrying arms, ammunition or any offensive weapons.

Before implementing the curfew, REGSEC had banned the wearing of smock in the area with immediate effect, explaining that “This was necessitated by the fact that criminals or unscrupulous elements hide arms and ammunitions in smock and attack opponents or innocent civilians”. Read Full Story
Advertise Here contact ads[@]ghheadlines.com
Related Items news
news