Ghana Web
Serbian coach Milovan Rajevac arrived in Ghana on Sunday night to sign a contract to coach the senior national team for his second stint with the four-time African champions - the Black Stars -, Ghanasoccernet.com reports.

The 67-year-old according to the report, is in town ahead of him being named as the new coach of Ghana latest by Tuesday when all formalities are completed.

He will have a meeting with officials of the Ghana Football Association (GFA) on Monday morning before he is sent to meet the Sports Minister of Ghana, Hon. Mustapha Ussif later in the day.

Following his meeting with the Sports Minister, Rajevac will sign a two-year performance-based contract to coach the Black Stars and repeat his magic with the side he guided to the quater-finals of the 2010 World Cup.

It is believed that the GFA and Rajevac have already agreed all the terms of his contract before his arrival as there is the for things to be completed quickly in time to name his squad for next month's World Cup qualifier against Zimbabwe.

The Serbian will be given an official place of his residence as well as an official car to to help him effectively carry out his duties.

This revelation comes even before the GFA officially announces the outcome of the report of the three-man committee to select a new coach for the senior national team.

This confirms the GFA is on the verge of naming Rajevac as the new coach of the national team for his second stint with the Black Stars, GHANAsoccernet.com can exclusively report, confirming our revelation the day Charles Akonnor was sacked.

Now the three-man committee, tasked with selecting a new coach for the Black Stars, has agreed to hand the experienced Serbian the mandate to return to coach the Black Stars after his heroics with the national team at the 2010 World Cup.

The committee decided to narrow down on 'Milo' for various reasons including his knowledge of the Ghanaian terrain, his strong disciplinary record and on-the-field record to at least salvage the Black Stars World Cup qualifying campaign and to take the country to the 2021 Africa Cup of Nations tournament in Cameroon.

With more than 100 CVs received from coaches across the world seeking to lead the Black Stars, the committee agreed that the safest bet is to name someone familiar with the terrain and has got the potential of bringing back the glory days.

Rajevac will lead Ghana in the next World Cup qualification matches against Zimbabwe in a doubleheader next month.

Ghana are currently second in the standings after two rounds of the qualification matches of the global tournament.

The Serbian will also be tasked to lead the Black Stars to a 2021 Africa Cup of Nations triumph in Cameroon next January.

Rajevac, in his first reign as Ghana's coach, was named African Coach of the Year in 2010 after impressive outings at the AFCON and World Cup respectively.

The 67-year-old made history by leading the Black Stars in 2010 to reach the quarter-finals at the World Cup in South Africa.

Few months earlier, he led Ghana through to the final of the Africa Cup of Nations (Afcon) in Angola in which they fell to Egypt.

Prior to his World Cup exploits, he first gained acclaim for leading of the injury-ravaged Black Stars side to the Afcon final, which was a surprise to many.

The squad of 23 players included seven players who were part of the Ghana team that won the Fifa U20 World Cup in 2009.

The young Black Stars side held their opponents in the final match game against Egypt up to the 85th minute, when substitute Mohamed Nagy 'Gedo' snatched an incredible match-winner.

In the World Cup, Ghana came quite close to becoming first African nation to make it to the semi-finals, when they missed a penalty in the last minute of the quarter-final match against Uruguay.

Asamoah Gyan's strike hit the crossbar in what could have been the match-winner, forcing the game to an extra shoot-out in which the Black Stars ended as the losing side.

Rajevac quit his job as Ghana coach two months after the World Cup heroics, taking on a new job at Saudi club Al-Ahli.

He has since been able to coach the Qatari nation's national side, Slovenian club Rudar Velenje and the national team of Algeria as well as Thailand. Read Full Story
Advertise Here contact ads[@]ghheadlines.com
Related Items sports soccer
sports soccer 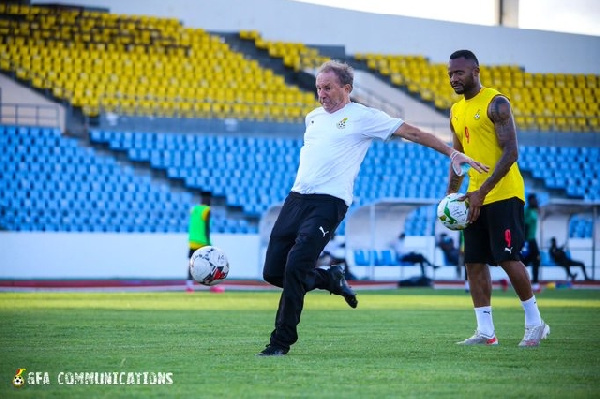