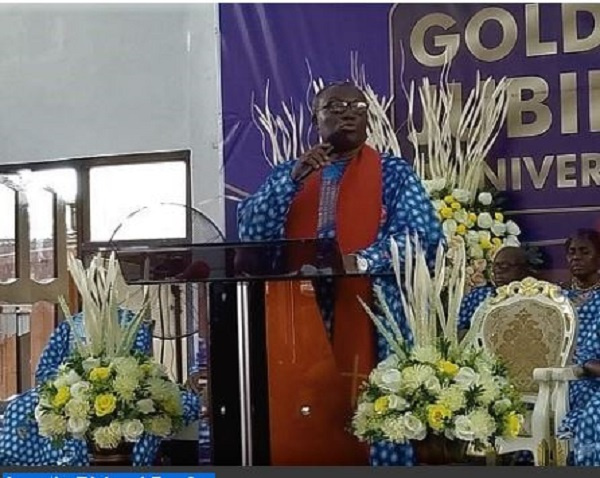 Ghana Web
The General Overseer of The Lord's Pentecostal Church International (TLPCI), Apostle Richard Buafor, has kicked against the establishment of a national shrine to cater for the spiritual needs of traditionalists in the country, describing the idea as retrogressive.

Speaking with the media during a ceremony held in Accra last Saturday to climax the 50th anniversary celebration of the Kwashieman Branch of the church, Apostle Buafor maintained that such an edifice would be an unnecessary depletion of national resources given that there are more interventions that require urgent attention and priority".

The Minister for Chieftaincy and Religious Affairs, Mr Samuel Kofi Dzamesi, at a press briefing in Accra last Wednesday disclosed that the government was considering building a national shrine to serve as a place of worship for traditionalists in the country.

That, he said, was in response to a request made by some traditional groups for a shrine to be built for them.

Mr Dzamesi is quoted as saying that the request for the national shrine was appropriate since Muslims in the country have a national mosque and a national cathedral is in the offing for the Christians.

“I think that since the constitution allows freedom of worship, we will study it very well and see how possible that will also be. We are not ruling out traditional shrines,” he is quoted as saying in the Daily Graphic.

Not needed Apostle Buafor, who is also the Resident Apostle for the Kwashieman branch of the TLPCI, said the country had come a long way to be entertaining such an idea.

"Ghana has come a long way, and establishing a national shrine is like taking the country backwards.

The idea to have a national cathedral has been heavily criticised as not channelling resources to more pressing needs given the challenges that the nation faces. Unfortunately, any decision to have a facility such as a national shrine will worsen matters.

“We should be seen as a nation interested in resolving the challenges that confront us with the provision of the basic and important needed.

Certainly, a National Shrine is not one of them and I don’t think it is needed at any time,” Apostle Buafor said.

As part of the church's golden jubilee celebrations, a sod was cut for the construction of a two-storey multipurpose complex which will serve as an extension of the church's school, "The Lord's Academy".

The project, which is expected to be completed within three years, is estimated to cost the church GH¢3 million cedis.

When completed, the multipurpose "Jubilee Complex" will have a conference hall, church auditorium, offices and guesthouse, and it will be used for social gatherings as well as church services.

The Lord's Pentecostal Church International, according to Apostle Buafor, was founded in 1969 in a "single room somewhere at the Awudome Estate" and it has since grown to become one of the fastest growing churches in the country, with over 56 branches in Ghana and the United Kingdom.

The event was also used to recognise and reward some founding and hardworking members of the church for their contributions to the growth of the church.

PIAC kicks against usage of Heritage Fund for COVID-19 fight