Odumase-Krobo (E/R), GNA - Mr Joe Ghartey, Minister of Railway Development over the weekend paid a courtesy call on Nene Sakite II, The Konor of the Manya Krobo Traditional Area, at his palace at Odumase-Krobo in the Eastern Region.

The visit was to afford the Minister the opportunity to brief The Konor on the level of progress of the construction of the Tema-Mpakadan Railway line, which passes through the Manya Krobo Traditional Area.

Mr Ghartey expressed his gratitude to The Konor for his support for the project.

"I came to thank you for the support that you showed in the project, very early in the development of the project," he said.

"Especially, because of the historical experience that the people of Krobo have had with Government taking over their lands in Akosombo and Kpong (for the construction of the two hydro-electric dams); and the impact it has had on their lives and the difficulties they are still having with regards to resettlement and the payment of compensations."

He said in spite of all the outstanding issues that have not been resolved, The Konor has given his blessings to the project.

He said one day, when the history of the rejuvenation of the railway was being told, the name of Nene Sakite II would be written in gold.

Mr Ghartey said the project was signed in November 2016, and was initially a Tema-Akosombo project, which was going to end at where the Dodi Princess ferry takes off.

The Minister said due to security reasons and to protect the integrity of the Akosombo Dam, the railway construction had to be diverted to Mpakadan.

He noted that the re-designing of the project, made it to go beyond the Volta River and ends at Mpakadan; adding that the construction of the railway bridge at the North Tongu side of the Volta River has begun.

Mr Ghartey said 60 per cent of the 96km Tema-Mpakadan railway line has been completed; of which 15km of the rail track had been laid in the Shai-Osudoku area.

"And even though the project was re-designed, we are told by the contractors, AFCONS that they would be completed by June 2020," he said.

He said the Tema-Mpakadan railway line, when completed, would help transform the area (Manya Krobo) completely; declaring that everywhere the train had gone in this world it transforms the place.

He said it was government's aim to build a total of 4,000km of railway lines in the country.

With regards to the Ghana-Burkina Faso line, Mr Ghartey said the consultants were going through a feasibility study and that they would finish by December.

"We have also started the procurement process, and there are four companies so far, which are still standing tall to go to the final stage of procurement after evaluation.

It is our hope that come next year second quarter, we shall be continuing the line from Mpakadan through Hohoe, Bimbila, Yendi, Tamale and going up to Paga,” the Minister said.

He said it was the vision of President Nana Addo Dankwa Akufo-Addo and his Burkinabe counterpart that there was a Ghana-Burkina Faso rail interconnectivity project.

Nene Sakite II said the traditional area fully support the project, stating that it would bring commerce and development to the area.

The Konor, who said he had personally gone round to see the railway project for himself added that he was impressed by the progress of work so far.

Mr Simon Kweku Tetteh, Lower Manya Krobo Municipal Chief Executive, speaking to the Ghana News Agency, said because a railway station would be sited in the Municipality, it would go a long way to boast business activities in the area. 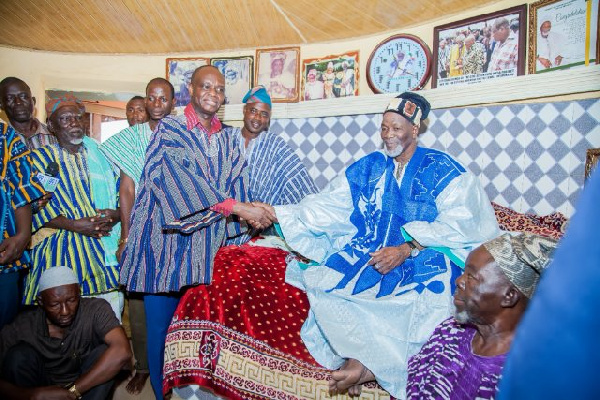