Bolgatanga, Aug 19, GNA – Ms Anita Mwinisonaam, the 2018 winner of ‘Miss Metro Ghana’, a beauty pageant, has launched a project in the Upper East Region to help address the problems associated with water and sanitation.

‘Miss Metro Ghana’, a special initiative of the Miss Metro Ghana Foundation under the management of Kosi Glah (KG) Consult, is aimed at crowning a queen annually who would be an advocate to educate members of the public on the negative effects of filth as well as champion the adoption of good sanitation practices.

The objective is to further complement government’s effort at attaining the United Nations Sustainable Development Goals (SDGs), particularly goals three and six, which aim at ensuring good health and wellbeing, and achieving clean water and sanitation for all by 2030 respectively.

The project, which would employ behaviour change communication approach, seeks to instil good attitudes in the youth especially children and make them ambassadors of the campaign as well as engage key stakeholders to amplify the voice against indiscriminate littering of the environment.

Ms Mwinisonaam said she contested and worked to win the crown because she had the passion for  good sanitation practice and the zeal to improve sanitation as it was disheartening to see people die from filth and unsafe water related diseases.

“According to the World Bank report in 2012, about 19,000 Ghanaians including 5,000 children below the age of five died as result of poor sanitation practices and Ghana’s economy lost about GH¢420 million in that year and the National Malaria Control Programme of the Ghana Health Service indicates that one person dies of malaria every three hours,” she said.

Ms Mwinisonaam, who suggested attitudinal change as the most effective weapon to tackle the phenomenon, said the project would target 40 basic schools and 40 religious bodies across the 15 Municipalities and Districts in the region, in a bid to educate people on how human activities adversely affected health  and welfare of people.

Mr John Godson Aduakye,  the Regional Director, Community Water and Sanitation Agency (CSWA), said the sanitation menace was the biggest problem confronting the country and indicated that only 15 percent of the entire region had good sanitary environment and attributed the cause to negligence on the part of people.

Dr Winfred Ofosu, the Regional Director of the Ghana Health Services, said the consequences of poor sanitation, resulting from human activities such as illegal mining, open defecation and indiscriminate dumping of rubbish among others was enormous.

He said in 2018 alone, the region recorded 40,000 cases of diarrhoea in children under the age of five years and the sanitation project, if  given the necessary support would help to reduce childhood mortality as well as diarrhoea and other related diseases such as cholera, malaria, typhoid, yellow fever and hepatitis A.

In a speech, read on her behalf by Mr Joseph Amiyuure, the Municipal Chief Executive of Bolgatanga, Madam Tangoba Abayage, the Regional Minister, said the campaign was timely as it was in line with government vision of attaining clean for all and promoting best sanitation practices.

The Regional Minister directed all the Municipal and District Assemblies as well as sanitation agencies in the region to cooperate and give Ms Mwinisonaam all the necessary support to enable the project succeed. 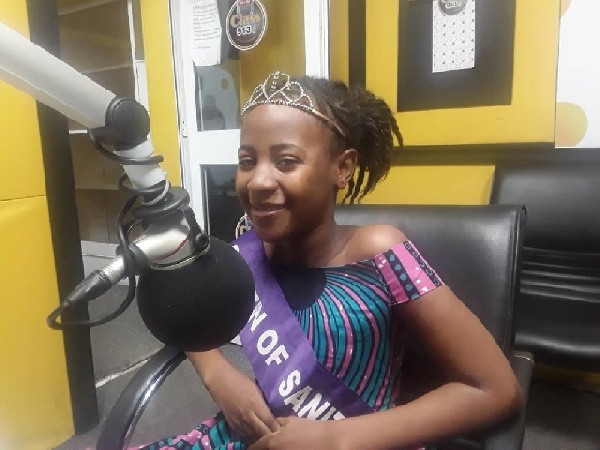