Kumasi, May 15, GNA - A 21 year old construction labourer, has been jailed 12 years by a Kumasi Circuit Court, for robbing a woman of her two I phones and cash at knife point, while sleeping in her room.

Isaac Nsiah, the convict at the beginning of the trial entered a plea of not guilty, but was found guilty by the Court, when he later admitted the offence in course of the trial.

Police Chief Inspector Timothy Amoako, prosecuting, told the Court presided over by Madam Mary Nsenkyire that the convict committed the crime at Achiase, in the Ashanti Region, on the night of 24th April 2019.

He said the accused forced open a window and through it entered the bedroom of Yaa Gyamfiwaa, complainant, stealing a cash of GH¢680.00, the two iphones from her handbag, whiles brandishing the kitchen knife he was holding, threatening to kill her if she dared raise the alarm.

The prosecution said after bolting with the booty, complainant who could identify him made a report to the police in the evening of Christmas day last year.

He said the convict was grabbed by complainant’s children and escorted to the Achiase Police Station, where he was detained by the police.

Mr Amoako said during Police investigations, convict admitted the offence and led the police to retrieve one of the phones and said the other phone had been given to one Jeffrey, who is now at large.

The Convict also admitted stealing the GH¢680.00, which he shared with the said Jeffrey. 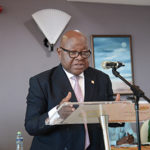