LAGOS, Aug 10 (Xinhua/GNA) - Nigeria's ruling party has alleged that some members of the National Assembly were planning to impeach President Muhammadu Buhari.

Ahmed Bola Tinubu, the National Leader of All Progressives Congress (APC), who made this known in southern city of Uyo, warned the plotters to drop their sinister move because it is not possible for a lizard to wrestle an antelope.

He described what is happening in the country now as a war between progressives and the conservatives.

He expressed happiness that oil-rich state of Akwa Ibom had embraced the change of Buhari.

The Nigerian leader is currently in the United Kingdom for a 10-day vacation.

Buhari has duly transmitted power to the Acting President before traveling to London on vacation.

The siege to the National Assembly by State Security Service (SSS) operatives has drawn a lot of reaction from opposition parties and individuals.

This siege came amidst claims of attempts to force Senate President Bukola Saraki out of office.

Scores of senators and members of the House of Representatives were initially blocked from entering the National Assembly premises, but later allowed to move in after threatening to force their way in. 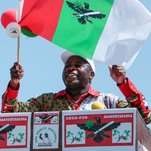