US government to give $2.5m development support to Ghanaian farmers – Ambassador 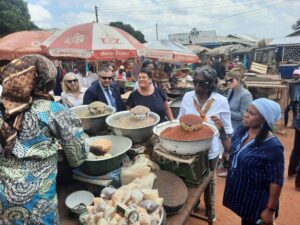 US government to give $2.5m development support to Ghanaian farmers – Ambassador

Ambassador Linda Thomas-Greenfield, United States (US) Representative to the United Nations has said that the US Government’s $2.5 million scheduled development assistance in Ghana is to support farmers to increase food production.

She said the US Government was concerned about challenges facing farmers in the country and would be working with them and supporting them to boost food production.

She said this after visiting a maize demonstration farm at Nangbagu in the Sagnarigu Municipality of the Northern Region on Saturday to hear from farmers and particularly women farmers some of the challenges confronting them regarding food insecurity.

She interacted with grains and other foodstuff traders at the Aboabo Market in Tamale to learn about their challenges, as well as visited a smock weaving centre in Tamale, which is led by a Mandela Washington Fellow, to learn about its operations.

The farmers raised issues of high prices of fertilizer and its shortage on the market, and climate change resulting in a change in rainfall pattern, which were affecting crop yields.

Ambassador Thomas-Greenfield said “We are concerned about that and look forward to working with them and supporting them through United States Agency for International Development (USAID). We just provided 2.5 million dollars to support fertilizer and production in the country.”

On Friday, August 05, USAID announced through a press statement that “The United States is providing $2.5 million in new development assistance, subject to congressional notification, in Ghana” to intensify efforts to directly mitigate the impacts of growing food insecurity, which had been exacerbated by Russia’s unprovoked aggression in Ukraine.

The statement indicated “This additional USAID funding in Ghana will focus on developing and marketing inorganic and organic fertilizer products, and support fertilizer importers and blenders, manufacturers, including private sector partners, to bring more fertilizer into the country and ensure they reach the most vulnerable farmers.”

Ambassador Thomas-Greenfield spoke about the underlying causes of the current food crisis saying “We know that there are many causes for this food insecurity; COVID-19 clearly is a major cause. Climate change; I am hearing that the rains have come later, but we also know that conflicts, the war in Ukraine has led to a decrease in the availability of fertilizers. So, we are hoping to work with this community and other communities across the continent of Africa to help you adjust to and deal with these challenges.”

She called on all partners to work to boost food production saying, “While the US is the largest funder, we need others to step up to the place as well to provide funding so that we can get out of these crises.”

She said “We hear from many of the other visitors to Africa that the war in Ukraine; it is US sanctions that are causing these crises. And what we believe, and we want you to hear, is that that war has caused its crises. It is Russia’s unprovoked attack on Ukraine blocking Ukrainian grains and fertilizers from getting to the market, and Russia holding back on its own fertilizers” that had caused the crises.

The post US government to give $2.5m development support to Ghanaian farmers – Ambassador appeared first on Ghana Business News.