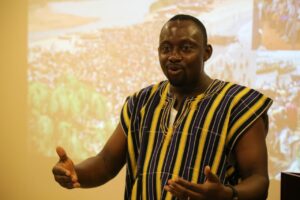 Convenor for the Ghana Fisheries Alliance and Programmes Manager of Friends of the Nation (FoN), Mr Kwadwo Kyei Yamoah has indicated that “implementing the Closed Season without strict compliance of the Fisheries Laws, is a waste’.

According to him, a successful Closed Season must not be marred with the practice of Illegal, Unreported and Unregulated fishing activities by fishers.

He said though the 2022 Closed Season had been somehow successful, there was the need to consolidate the gains with enough commitment from the government and stakeholders to ensure compliance and enforcement in the sector.

This was contained in a statement issued and signed by Mr  Kyei Yamoah after one month of Closed Season for Artisanal fishers which started in July 01 and ended on July 31.

He noted that the fishing Closed Season was an important tool for fish conservation and that “the current fisheries resource in Ghana is over-exploited and near collapse as a result, fish landings by fishers are all time lowest making the fishers running at a loss leading to deepened poverty”.

He said one way to reverse the collapsed fisheries was to ensure that measures are put in place to rebuild the marine fish stocks to have adequate fish in the sea”.

Mr Yamoah explained that to rebuild the fish stock there was the need to manage the people who fish and regulate the fishing method being used, adding that any method of fishing that harvested juvenile fishes was unsustainable and would lead to the total collapse of the fish stock.

He stressed that though many artisanal fishers complied with the 2022 Closed Season, the government has not been able to deal with the Illegal Unreported and Unregulated (IUU) fishing especially because the Fisheries Enforcement Unit (FEU) was not resourced to enforce the fisheries laws.

He intimated that “after the Closed Season, if   fishers still go to sea with all the illegal nets and gears to catch juvenile fishes, we will lose all the gains of the Closed Season to illegal fishing which means that all the efforts at closed season would have been wasted”.

Mr Yamoah stressed the need to enforce the fisheries laws after the Closed Season and punish fishers who disregarded the Fisheries Laws.

The post Closed Season is a waste if Fisheries Laws are not enforced – FoN appeared first on Ghana Business News.