President Akufo-Addo challenges Africa to fight for its independence 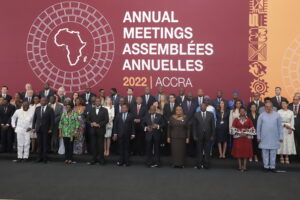 President Akufo-Addo challenges Africa to fight for its independence

President Nana Addo Dankwa Akufo-Addo has called on African nations and financial institutions to come up with an economic model that will benefit the Continent and not serve the interests of others.

For far too long, profits from Africa’s resources had benefited foreign interests, while the Continent suffered abusive borrowing costs on international capital markets, he said.

“There is no basis for our economies being saddled with a so-called “African Risk Premium”, which translates into higher spreads than for our European and American counterparts, particularly when our resources were the catalysts for the economic advancement of Western nations.”

“It is time we worked to address the structural barriers to our development,” President Akufo-Addo said when he opened the 2022 Annual General Meeting (AGM) of the African Development Bank (AfDB) group in Accra on Tuesday.

The four-day meeting is being attended by some African Presidents, including the visiting Mozambican President, Felipe Jacinto Nyusi, and the Tanzanian President, Samia Suluhu Hassan.

It is on the theme: “Achieving Climate Resilience and a Just Energy Transition for Africa.”

The AGM will address climate change and energy transition challenges of the Continent and make a case for the replenishment of the African Development Fund, and for the Fund to be allowed to use its equity to leverage more resources for Africa’s development.

President Akufo-Addo told the meeting that it was time Africa took bold steps to cut relations with multi-nationals who dodged taxes and engaged in illegitimate commercial transactions on the Continent.

“We must deal with “tax-dodging” and illegitimate commercial transactions by multinationals, which account for 60 per cent of the $88 billion of illicit financial flows from the continent annually, and other relationships which inhibit our development.”

“Now more than ever, it has become urgent to take the necessary steps to transition towards becoming a resilient continent. Africa must exploit her productive capabilities collectively and build the capacity of her continental development banks in order to realise the Africa We Want and an Africa Beyond Aid.”

The President noted that the immediate consequences of the COVID-19 pandemic, which has also been heightened by the Russian invasion of Ukraine, was compounding the debt challenges of the Continent.

He said with 18 African economies having to face credit downgrades, even when all economies were suffering fallouts from the pandemic last year, brought to the fore Africa’s vulnerability to monetary policy stance of some developed nations.

The situation could further exacerbate the increasing cost of borrowing on the international capital markets for African nations.

President Akufo-Addo said the combined effects of the debt situation, rising interest rates and rising cost of living in Africa were resulting in severe macroeconomic and financial instability.

“What is clear is that the resulting damage cannot be cured so easily with the limited fiscal tools at our disposal and national policy adjustments,” he said.

“Therefore, I reiterate my call for an elevated role for Africa’s Premier Bank, the AfDB, only that, this time, I respectfully ask for a sense of urgency due to our mutual enlightened awareness.”

“As a Triple A-rated financial institution with an active portfolio of some $61 billion in more than one hundred and forty-two thousand (142,000) locations, the AfDB is in a position to drive sustained transformation in Africa.”

The President underscored the need for Africa to be dependent on its own financial resources for sustainable development.

The Continent, he said, must expand the capital base of its financial institutions like the AfDB, and African Development Fund (ADF) to make them significant to her development.

“The stakes could not be higher and clearer. To move towards resolving these, we must support the Bank to do what a bank does – to mobilise and invest funds. We must activate a process that moves this Bank from the corridors of ‘Billions to Trillions’, given the scale of the challenges on this continent,” President Akufo-Addo said.

“Ultimately, the AfDB must become the dominant financing institution for African transformation in the medium term…This means we must bridge and overhaul the financing gap that exists with other complementary institutions.”

On the climate change, President Akufo-Addo noted that though Africa had caused the least emissions, only $6 billion out of the worldwide total of $30 billion of climate adaptation finance flows to Africa.

Even though the United Nations Environment Programme has projected that between 75 million and 250 million African people would be affected by climate-induced water stress, financing COP26 compliance could potentially strand Africa’s natural resources, including natural gas.

“How do we develop under such unfair circumstances?” he asked, and urged the AfDB to empower Africa to seek justice in the journey to clean energy in a manner that optimises the exploitation of the Continent’s abundant natural resources.

“We must ensure that our prioritised climate actions are consistent with our current challenges and aspirations as a continent. This will be a demonstration of the theme chosen for this Annual Meetings. We must avoid our natural resources being stranded in the upcoming negotiations in Egypt at COP 27.”

“The stronger bonds between ecology, economy and conflicts demand that a bold and holistic approach is taken. It is in that light that I consider the theme of this Annual Meetings both timely and appropriate.”

“At the end…. Africa expects a framework that reconciles people and planet for peace. We cannot fail the people and the planet. Both must win. But for this to happen, Africa must win.”

The President stressed that the empowerment of African institutions and the engagement of communities will be vital to addressing the socio-ecological challenge of Climate Change.

He called on the AfDB to foster a culture of proactive and risk-based approaches; away from current reactive and crisis-based practices, to restore the ecology.

“This should involve effective coordination, communication and cooperation, driven by adequate finance and political will. As the AU Champion of Financial Institutions in Africa, I pledge my support in this regard,” he said.