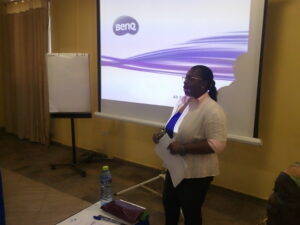 Nana Yamfoah Amoa-Sekyi, a Legal Practitioner, has admonished Parliament to consider amending part of the law which allows a child the right to consent to sex at age 16.

This, she said, would help address the high rate of defilement cases being recorded in the country and reduce unwanted teenage pregnancies.

Currently, Ghana’s Criminal Offences Act, 1960 (Act 29), pegs the age of sexual consent at 16 years old, the minimum age at which an individual is considered legally old enough to consent to participate in any sexual activity.

However, a child is said to have been defiled when they have obtained 16 years and below.

Also, the country’s Children’s Act and the Criminal Procedure Code 1998 (Act 30), set the legal age for marriage at 18.

Speaking in an interview with the Ghana News Agency (GNA), on the sidelines of a capacity building workshop, held for some teenage mothers and community leaders in Korle Gonno and its environs, in Accra, Mrs Amoa-Sekyi said many people were exploiting that gap in the law and abusing the children.

She noted that this was contributing to the high number of defilement and teenage pregnancy cases being recorded across the country.

“There is a lacuna in our law as you have rightly said, that consent for sex is 16 years, meanwhile, defilement is 16 and below.

“If you take a child and have sex with or without her consent, is defilement, and then, the same law says that at 18 years, you are now an adult, and then, another one says at 16 years, you can marry with the consent of your parents,” she said.

Mrs Amoa-Sekyi, who is also the Director of Public Education, at the Commission on Human Rights and Administrative Justice (CHRAJ), said Parliament must take a critical look at the codes, fine tune them to ensure that there was uniformity to help fight against teenage pregnancy.

“So, there is a whole confusion around that, and that is where there seems to be a weakness. So, it is up to Parliament to correct these gaps,” she emphasised.

The workshop, organised by the International Network of Religious Leaders Living with or personally affected by HIV and AIDS (INERELA Ghana), with funding from the United Nations Women Trust Fund, aimed at increasing knowledge and awareness on violence against women and girls.

It also sought to build the capacity of teenage mothers and community leaders to become change ambassadors.

Mrs Amoa-Sekyi courted support of the Civil Society Organisations and faith-based organisations to raise the necessary attention to compel Parliament to make amendments to codes.

Mrs Amoa-Sekyi urged parents to be more responsible to protect their children, especially the girl child from predating men.

Mrs Paulina Essel, Counselor at CHRAJ, said pregnancy at a very early age was harmful to every girl and sometimes, life-threatening both for the mother and the baby.

“The normal age for pregnancy is at least 18-20 years old, and if you get pregnant earlier, there is a high risk that you will have to deal with health issues,” she said.

Tackling these challenges and gaps, she explained, would require a multi-sectoral approach.

These include, involvement of community, traditional and religious leaders as gatekeepers of the relevant laws and policies, increasing the retention rate of adolescent girls in schools, empowering out of school adolescents through vocational skills training and an enhancing response system to provide the necessary support for survivors, Mrs Essel added.

Mrs Mercy Acquah-Hayford, Executive Director of INERELA Ghana, admonished parents to avoid leaving their children in the care of people they barely knew, to protect them from sexual abuses.

“Let’s be friends to our children because when we are friends to them, they can tell us issues that are of concern to them,” she added.

She also advocated changes in some outmoded cultures to protect the dignity of children.

The post Correct legal discrepancy that allows children to consent to sex at age 16— Lawyer to Parliament appeared first on Ghana Business News.