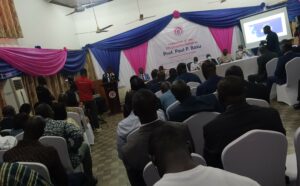 Professor Paul Bosu, the newly inducted Director-General of the Council for Scientific and Industrial Research (CSIR), has appealed to the Government and other stakeholders to help protect the Council’s lands from encroachment.

“Our lands at the Animal Research Institute (ARI) site at Katamanso here in Accra are under siege by land guards and miscreants,” he said.

At his induction ceremony in Accra on Friday, as the Seventh Director-General of the CSIR, Prof Bosu said the Council’s lands were legally acquired by government for research and development purposes.

However, issues surrounding the ownership and reclaiming of the lands, with low funds to support research and technological development, were the two major challenges the CSIR faced, he said.

Pro Bosu appealed to the Government to take swift action on the implementation of the National Research Fund Act to make resources available for research and development of the country.

The continuous eruption of challenges such as food security, COVID-19 and waste management were worrisome, which called for concerted efforts to address, he said.

Mr Oliver Boakye, the Special Advisor to the Minister of Environment, Science, Technology and Innovation, who read a statement on behalf of the Minister, said the Ministry was aware of the various challenges the CSIR faced.

“Live above your challenges, not to ignore them but don’t allow them to make you lose focus on your core mandates as you resolve these challenges,” he stated.

He said the Ministry and the Ministry of Education were working towards the operationalisation of the National Research Fund, which was passed by Parliament in 2020.

Prof Robert Kingsford Adaboh, the Chairman of the Council, said a year and half break from work by CSIR intensified the rate of encroachment on the lands of the Animal Research Institute.

That, if not stopped, would disrupt animal, feed and disease research and technological development of the country, adding: “No country can develop without science and technology.”