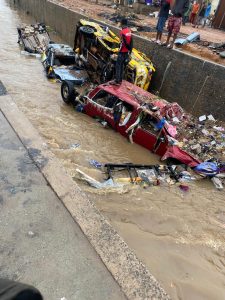 Rains have succeeded in stripping the cover of the city of Accra following the flooding of several places within the capital after a heavy downpour that lasted several hours from Monday night to Tuesday.

The capital is bare naked, literally becoming a pale shadow of itself as floodwaters were seen running off major roads, cutting off vehicular movement and causing havoc in households.

Some residents had their rooms flooded owing to the volume of rain.

This comes less than a week after rains submerged a number of places.

Areas such as Kaneshie, Alajo, parts of Tema, Adabraka, Asylum Down were flooded, compelling some persons to evacuate their places of abode.

The phenomenon obstructed traffic flow on some major roads in the capital. Ghanaians took to social media to share videos of flooded areas as the downpour continued as some homes were flooded as a result.

Already, the Ghana Meteorological Agency (GMet) has predicted that three more heavy rains will hit the southern part of the country before the end of June.

Principal Meteorologist with the research and applied meteorology directorate of the GMet, Nana Kofi Opoku, said the phenomenon is likely to occur because the peak of the rainy season is approaching.

He noted that “when we look at climatology and the forecast that we released for the March, April, May, and June season, it looks like we have on average, 3 more such incidents to occur.”