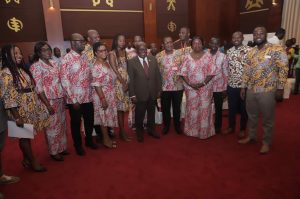 President Akufo-Addo in a pose with the winners

Speaking to the awardees and management of Graphic Communications Group, organisers of the competition, President Akufo-Addo said Ghana’s economic development and stability were dependent on its ability to invent and develop new products.

That, the President indicated, had informed government’s policy direction towards increasing STEM education as against the Humanities to 60-40 percent in the next ten (10) years.

President Akufo-Addo said the world’s economy in this dispensation, was largely driven by science and technology, and entreated Ghanaian students to “think seriously about this (STEM).”

He said countries that were succeeding in today’s world, were those that had emphasised on teaching and learning of science and technology, adding “We cannot afford to be left behind either by our fellow Africans, or by any other people of the world.”

The entire globe, including Ghana’s, according President Akufo-Addo, was going through major economic, social and geo-political challenges. However, he expressed confidence that Ghana and the rest of the world would recover from the turbulences soonest.

Mr Afful thanked the President for his immense inspiration and support to the Junior Graphic Essay Competition project.”

The overall winner of the 2021 Junior Graphic Essay Competition, Evangelyn Ukoma Awa, presented to President Akufo-Addo a framed copy of his essay. 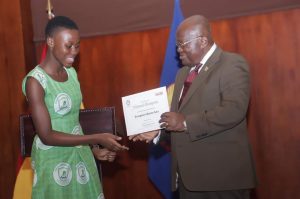 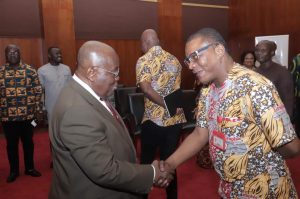