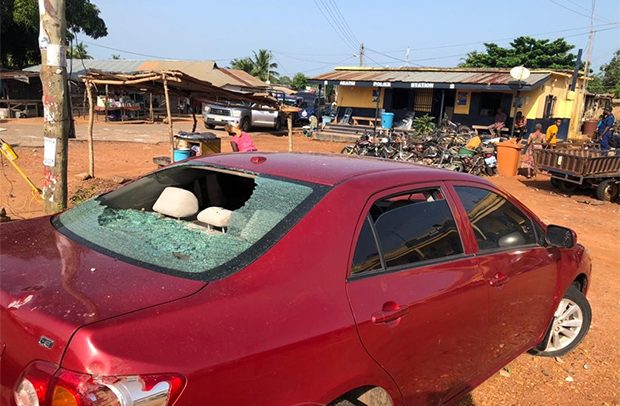 There is a growing tension at Akatsi in the Akatsi South Municipality of the Volta region, following an attack on the Police station over the death of a 22-year old unemployed Etornam Avulekpor.
The clash, which started on Friday, November 5 at about 0600 hours, allegedly resulted in the injury of some agitating youth as a result of an attempt to attack Chief Superintendent Atsu Joseph Dzineku, Akatsi South Municipal Commander, over an alleged beating of the deceased during an operation conducted by his outfit to clamp down on some criminal activities in the area on Wednesday.
CSP Dzineku disclosed to the Ghana News Agency (GNA), they found about 60 rappers of substances suspected to be Indian hemp during the exercise which was conducted at Akatsi ‘Asiviaveme’ area.
The exercise, CSP Dzineku said, led to the arrest of three suspects including the deceased who suffered some health complications after the arrest was made.
He said the deceased was moved to Hoggar Clinic, a private health facility within the Akatsi township before later being transferred to the Volta Regional Hospital in Ho to seek further medical attention during which he passed on Friday November 5.
The police chief explained that the melee, which saw the throwing of stones and other offensive objects and burning of lorry tyres near the Police station, led to the damage of some vehicles parked at the station as well as some shops and passing vehicles.
“I tried to calm the situation by calling for reinforcement from the region, where they responded swiftly,” he added.
Mr Dzineku also stated that he sustained a minor injury during the attack which he managed to bring under control.
However, some youth of the town have alleged that the Police applied some maximum force in arresting the suspects, which resulted in one sustaining severe injuries and was later taken to hospital for treatment after the arrest.
Etornam, popularly known as ‘young money’ was later pronounced dead whilst receiving medical attention in Ho.
The situation, which caused the wrath of some youth, massed up and went to the Police station to express their dissatisfaction over the alleged beating of the deceased leading to his death.
Edward Ayisu-Xede Dogbeda, brother of the deceased, said his brother was not engaged in any act of criminality during his arrest, and that “the police did not inform us about what actually caused the arrest of my brother.”
The family is alleging the manner in which the deceased was handled caused his death, and are therefore calling for justice to prevail.
CSP Dzineku assured, Police were still investigating to know the cause of death.
Officers from the Special Weapons and Tactics (SWAT) of the Ghana Police Service have since manned the Police station to ensure order as well as the safety of life and property.
Municipal Chief Executive (MCE) of the area, Martin Kofitsey Nyahe appealed to the youth to remain calm as they expedited action to ascertain the cause of death.
Mr Nyahe, who chairs the Municipal Security Committee (MUSEC), said the timely intervention of the police helped in preventing more harm as thought.
The MUSEC, he said, will be monitoring the situation as the police patrol the area.
“An emergency meeting would be held on Monday, November 8 to discuss the circumstances leading to the disturbing activities. 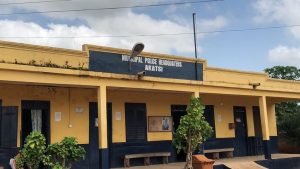