Even Losers Are On Thank You Tour – Nana, Apologises To Oguaa 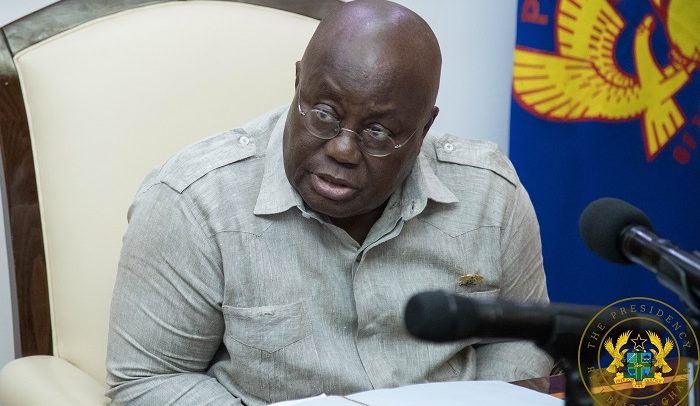 Even Losers Are On Thank You Tour – Nana, Apologises To Oguaa

President Akufo-Addo has thrown another subtle jab at his opponent, John Dramani Mahama of the NDC over the Thank You tour that the former President has been embarking upon.

The President is on the last leg of his tour of the country in Greater Accra, and as part of commissioning, cutting sods and inspecting ongoing projects, he has used the opportunity to thank the people for re-electing him.

The President said he cannot be ungrateful to the people for renewing his mandate during the 2020 general election and insisted that he has the duty to tour the country to show his appreciation for what the electorate did for him.

On Peace FM in Accra yesterday, he was asked by the host, Kwami Sefa Kayi, why he was doing a ‘Thank You’ tour, and the President threw a jab at his predecessor whom he defeated twice, including the last presidential election.

He said “even people who lost the election are going round thanking the people; how much more me?” sparking spontaneous laughter in the studio.

“I’m going round inspecting road projects, schools, hospitals, how far? What are their problems? The responses of the people which then help shape the conversations of the government and policy direction.

“I am also thanking the people for their votes, especially Greater Accra, 2020 was not what we had hoped for, we lost some more seats, at least seven. But nevertheless, we have the substantial votes here so it is important that I also thank them for the expression of confidence.”

The President also admitted that he got it wrong when he recently said in the Central Region that he did not promise to build a harbour in Cape Coast, and said he was sorry for holding that position.

The opposition NDC have been attacking the President for saying he did not make that promise.

Explaining issues yesterday, the President said, “Let me confess, I made a mistake on the Cape Coast harbour. Even with the mistake, we have to have a rethink. We cannot have a harbour at Takoradi and Elmina and have another one at Cape Coast. But I have to apologise to the people of Cape Coast. Presidents are humans and they can make mistakes.”

On the heated debate over the Proper Human Sexual Rights and Ghanaian Family Values Bill, seeking to ban homosexuality and lesbianism (LGBTQ+), the President said, “I don’t feel pressured by the LGBTQ+ discussions. What I expect is for the process to be civil.”

He said that he wants those for and against the anti-LGBT Bill, which was laid in Parliament through a private members’ initiative, to tolerate each other, saying, “I am hoping the process will be conducted in an acceptable manner.”

“I think that it will be a credit to Ghanaian democracy if this matter is handled in a correct manner. I believe that reference has been made by the bill to the constitutional and legal committee and that is the committee to look at issues of rights, constitutionality, and legislation in our Parliament,” the President said.

He added that, “I hear over 130 memoranda have been submitted to them. I am anticipating that they will all be looked at closely before they (Parliament) can come to some consensus. The chairman of the committee has spoken about what his preoccupation is, which I think are very legitimate to be satisfied with the constitutionality and legality. All these are part of the mix, and I am hoping that the process will be conducted in an acceptable manner.”

President Akufo-Addo said he has the desire to see to the development of Ghana.

“I made up my mind that with the strength I have, intellectually, physically, spiritually, I’ll put it to the service of this country to see what contribution I can make.”

“I felt that the most effective way I can also help is through political engagement. So that has been the drive. The drive about Ghana, its present, and its future and continues to be my mantra,” he said.

The President added that “what to do to bring about the improvement of the conditions of life of our people, what to do about improving the standing of our nation in the comity of nations these are the things that drive me and continue to drive me. And they will, until the time comes, 7th January 2025,” he said.

He added that “Ghanaians are a very praiseworthy people, and serving them is an honour as far as I am concerned and a privilege.”

He said despite the impediments in his way by his opponents, he is determined to leave a legacy.

“I know all the difficulties, the negativity; you’ll wake up in the morning, and someone is on radio insulting you all day all night, and you have nothing to say because if you do, you’ll be accused of preventing others from speaking about you.

The President gave an assurance that there would be amicable resolution to the Ghana School of Law entrance exams impasse.

The President said he was very disturbed by the developments at the Ghana Law School where the lack of facilities is preventing mass admissions.

“On these matters there are examples elsewhere which we need to take into account, our situation began with certain institutional arrangement and we copied it largely from the British…” he said.

“I think that it is now being looked at in great detail and hopefully a solution is going to be found, it’s unfortunate. I cannot pretend that this is a happy coincidence for me at all, on the contrary, I am very disturbed by it.”

President Akufo-Addo added, “I am hoping that soon with the cooperation of the various stakeholders, General Legal Council, the Chief Justice himself, the Attorney General, and myself, we will find a solution to the situation.”

Touching on some of the works he has done so far, he said that his administration has performed well in the road sector, saying they are expanding the roads network considerably, but added that there was more to be done.

“In the first four years the amount of road coverage that has taken place, we are expanding the road network considerably. It is obvious even here in Accra you can see the road works that are going on and we are seeing it all over the country. It is by no means enough, we still have more to do to give our country the modern road network which it deserves but we are on it,” he indicated.

The President said “for me that is the encouraging aspect of my period as the president, serious efforts are being made to tackle some of the problems, not all will be resolved in my time.”

Thank you, but your $1,800 donations can’t even rent a house – Beverly Afaglo closes GoFundMe account 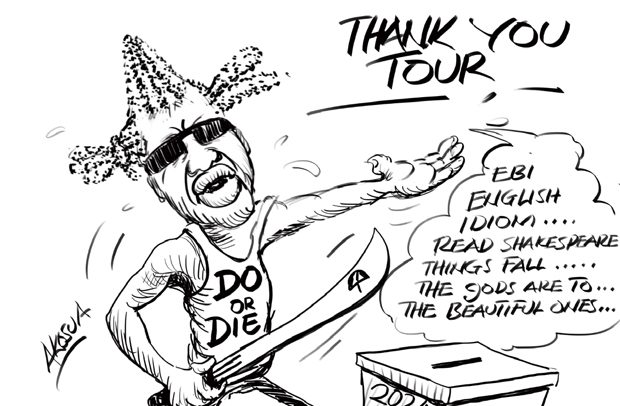 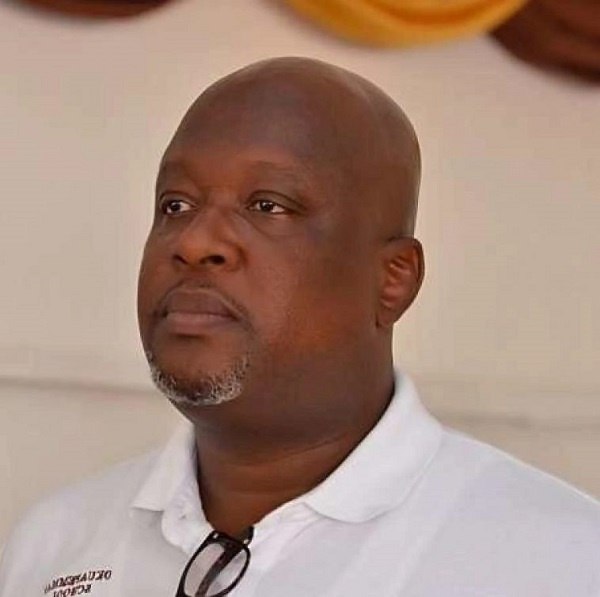 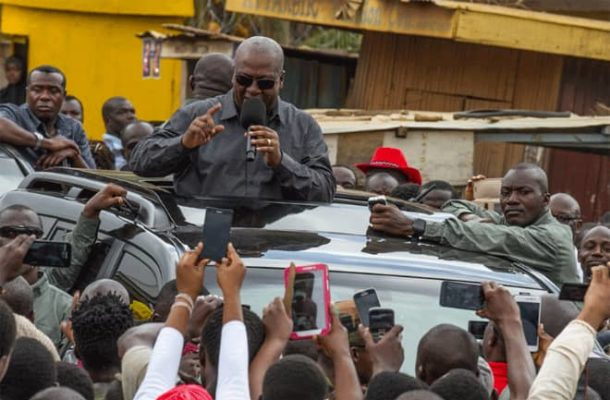 Mahama to embark on ‘Thank You’ tour of Western North 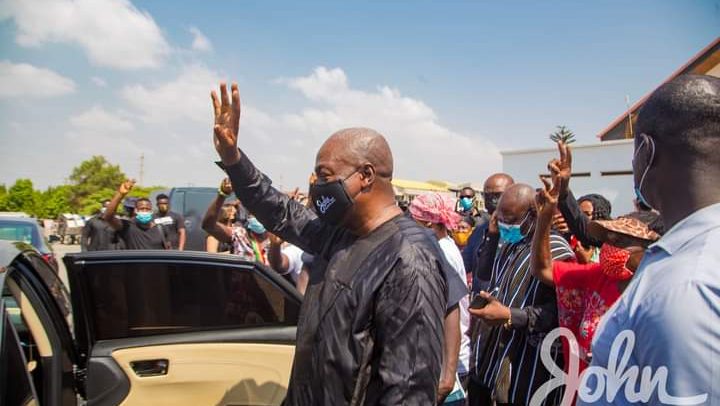 Mahama to take ‘Thank You’ tour to Volta Region on Monday 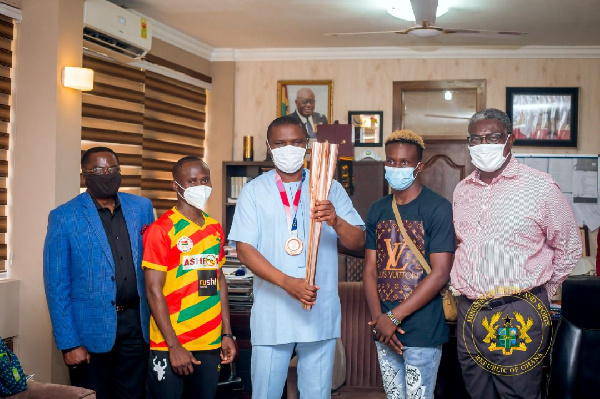 Thank you for your exceptional support - GOC to Sports Minister