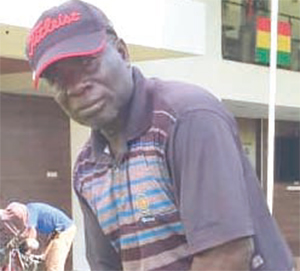 The second pre-tournament qualifier for this year’s Gold Fields PGA championship will tee off at the Celebrity Golf Club at Sakumono tomorrow and end this Thursday.

Over 50 golfers will be competing to gain qualifications of which 24 regular pro golfers are expected to qualify depending on their total gross score to make it to this year’s edition of the Damang championship.

The three-day event is the last qualification round for the championship after the first round came off earlier this year in March at Achimota. The results of the two events will be put together to determine first top 24.

Akwasi Prempeh made it clear that golfers can only play for prize money but not for qualification if they missed the earlier one because accumulation of points from the two will be used as benchmark.

15 PGA senior golfers and 15 foreign golfers will be added to the 24 regular golfers who will qualify for the Gold Fields PGA Damang Championship.

Speaking on Power FM in an interview, Tournament Director for PGA of Ghana, Akwasi Prempeh, hinted that all is set for the last qualifier to begin on Tuesday.

“We have prepared enough and ensured total adherence of all COVID-19 protocols for a successful event.

“For the foreign players they have their own order of merit to get golfers qualified for this year’s tournament,” Prempeh stated when asked how foreign players would get to qualify for the championship.

He touched on what to expect at this year’s Gold Fields PGA Championship.

“The Damang Championship will come off in November but date is yet to be revealed and the prize money will be increased as its has been each year and because of the foreigners there will be massive changes and improvement to make it one of the enviable golf championship in Africa every pro golfer would like to participate.

“Some golfers from South Africa and the UK will come to participate in this year’s championship. Other countries expected to join Ghana are Cote D’Ivoire, Senegal, Nigeria, Togo, Zimbabwe, Congo, Mali, Gabon and Equatorial Guinea just to mention a few,” he added.

because he could not defend his trophy last year due to COVID-19 which subjected the tournament to only Ghanaian-based golfers.