The Finance Minister, Ken Ofori-Atta, has announced that the government has decided to reduce the rate of the controversial Electronic Transfer Levy by 0.25 percent.

This means, the state will longer charge the proposed 1.75 percent but rather 1.5% on all electronic transfers if the E-levy Bill is approved by parliament.

Ken-Ofori Atta gave these details when he appeared before the House on Tuesday, March 25, 2022, to table the motion for the commencement of the debate on E-levy.

“During the period, the telecommunication operators agreed to reduce their charges by 25 percentage point to bring their part of the charge to 0.75 percent. In light of all these discussions and that same great spirit of cooperation, the government has also decided to reduce the rate of the levy from 1.75 to 1.5 percent of the transfer. At the consideration stage, I will bring the necessary amendments to reflect the changes”, he said.

Parliament is currently debating a motion moved by the Minister of Finance, Ken Ofori-Atta, on the controversial electronic transfer levy despite initial objections raised by the Minority.

Earlier, the Minority in Parliament objected to the motion because it was not captured in the business of the week.

“When the business statement was presented last week, it [E-levy] was not part of the business approved for the house. We have warned time and again and cautioned that we do want to be taken by surprise by a major economic policy of the government. Parliament cannot be that when a side is convenient with its number, then the business can go on. It cannot be. We will not accept that culture. So when they [Majority] did not have the numbers, they weren’t ready. Now, that they have the numbers, then you say we should do business.”

Despite the objection, the Finance Minister, Ken Ofori-Atta, was allowed to move the motion in Parliament.

Although the bill was not captured in the business statement of the house for this week, it was enlisted for the second reading and consideration on Tuesday.

This comes at a time the house is filled to capacity by both members of the Minority and Majority.

“The objective of this bill is to broaden the tax base of this country by imposing the levy on electronic transfer and enhance government’s drive for revenue mobilization. The levy, which is expected to raise GH¢6.9 million  in 2022 is a key mechanism that the government will use to ensure Ghanaians contribute their fair share towards the development of the country”, the Finance Minister justified.

The E-levy was introduced by the government in the 2022 Budget for basic transactions related to digital payments and electronic platform transactions.

The rate will apply to electronic transactions that are more than GHS 100 on a daily basis. This is different from the 1% telcos charge on transactions.

The levy has sparked controversy because of its impact on mobile money transactions and poor Ghanaians that use it.

The post Gov’t has agreed to reduce E-levy rate to 1.5% – Ken Ofori-Atta appeared first on Citinewsroom - Comprehensive News in Ghana. 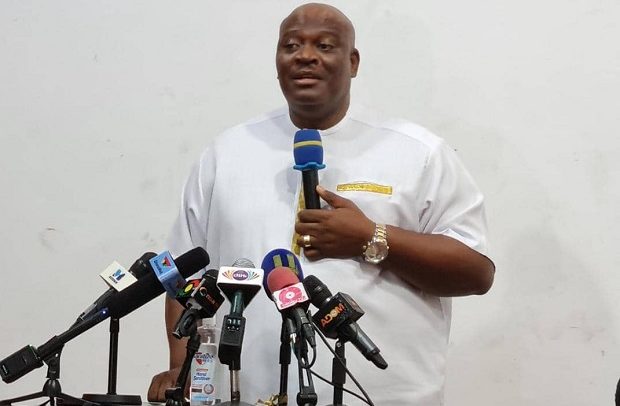