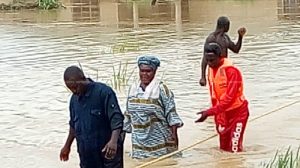 The National Disaster and Management Organization (NADMO) has admitted that structural deficit is partly to blame for their inefficiency to tackle floods in Accra.

According to the organization, although it has the capacity to deal with floods, the city’s engineering problems makes it difficult.

Many have called for a redesigning of Accra since the structural problems contribute to the flooding of the city.

“The engineering of our drains is one of our major challenges.  During the last year’s floods, I was at certain places and the drains were very small and virtually filtered so with a little rain, then the water begins to find its own level. That is a bigger challenge for us.  Accra has grown and the population is about the four million and the filth that is generated daily inundates the drains and choke them which is problematic.”

“This year, it is a concern to NADMO because the Meteo service has warned of heavy rains and the volume of water is going to be high. So if the volume viz-a-viz the gutter that we have, then it is going to be challenging and daunting”, he fumed.

Water spilt from choked drains unto the roads in some parts of Accra after heavy downpour continues to kill people and destroy properties.

To eliminate problems caused by drains, the urban planner suggested that the county should improve its drainage system.

NADMO’s readiness for this year’s floods

Mr. Ayisi said despite NADMO’s shortcomings, the organisation has embarked on a series of training to equip its officers to assist victims of floods.

“We are ready to prepared respond to site emergency calls as far as flood related accidents are concerned. We have the necessary equipment and logistics to go and work with, so when victims are affected we are ready to support them.  In terms of preparing our men also, we have done some watermanship exercises at Dahwenya to test our readiness in diving, helping people to cross when flood cuts them off. It was a three day exercise which also tested the readiness of our speedboats. We did these exercises and we realized that our men were ready to respond to emergency calls. For relief items, we have some at the Headquarters.”

A development and urban planner, Kofi Kekeli Amedzro believes the government and city authorities must re-engineer the city to end the perennial flooding.

He said the government must begin by improving the drainage system.

“We have to engineer an integrated waste management system that is able to ensure that the solid waste doesn’t get into the main drain system. As a matter of priority, we need to ensure that this becomes a key issue to invest in. We can’t wait for it to become a major flash-point for discussion every year. If we are serious about this, we have to invest massively in it and ensure that all the engineering works are done,” he said on The Point of View on Monday.
Water spilt from chocked drains unto the roads in some parts of Accra after the recent heavy downpour killing five people and destroying properties.

“We need serious engineering concerning the drain connectivity. We also have to look at developing receptacles so that when the water is coming from upstream to the downstream, those receptacles can actually hold some of the water,” he added.