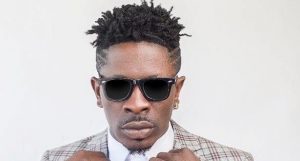 One of the artistes at the center of the commotion during the 20th Vodafone Ghana Music Awards (VGMA) Charles Nii Armah, with the stage name ‘Shatta Wale is currently in police custody.

Stonebwoy has also been invited by Police for questioning.

Citi News’ Hanson Agyemang reported that the two have been invited by the Accra Regional Police Command.

“We are not clear what the terms of the invitation are but it is related to yesterday’s incident. I have personally seen Shatta Wale who came in a few minutes ago. He was escorted to one of the senior officers at the station. I have been told Stonebwoy is here but I have not seen him personally”, he said.

It was not clear what triggered the fight but the audience and viewers at home saw Stonebwoy pull out a gun before walking off stage.

It started when Stone Bwoy was called up the stage to receive the award for ‘Reggae/Dancehall Artiste of the Year’ during last Saturday’s Vodafone Ghana Music Awards (VGMA).

Reports suggest that Shatta Wale walked on the stage with his fans allegedly to congratulate Stonebwoy for the award but the move was interpreted by Stonebwoy’s team as an attempt to protest against the award going to their favorite musician.

The confusion that ensued after that clash halted proceedings at the venue and the live broadcast for some minutes.

Stonebwoy later returned to denounce Shatta Wale alleging that he wanted blood and death in Ghana.

Calm was restored after nearly 30 minutes with the show continuing till the end.

While some patrons left during the melee, many stayed till the end of the show.

Stonebwoy apologizes
Stonebwoy, however, apologized when he came back on stage later to accept the award for ‘Songwriter of the Year.’

“I am really sorry for the incident that happened earlier on and I only had to react out of natural instincts because we all know how premeditative some people can be. We’ve seen on social media the treats and everything so we couldn’t come in unprepared because anything could have happened as you guys saw. I come in peace and I go in peace and I apologize to the whole masses of Ghana that the Awards is going to continue. Thank you very much for supporting my music, for supporting everybody else’s music. By their deeds we have all seen [them].”

Stonebwoy and Shatta Wale, both dancehall musicians are known rivals in the dancehall/reggae space. The two have been attacking each in separate interviews and social media posts.