Thousands of polling clerks are undergoing training across Kenya today ahead of the country’s general election next week.

Some 515 clerks were being trained in several classrooms at Kilimani primary school in Nairobi, which will be used as a polling centre, when I visited.

Two armed policemen were in the compound as well staff from the electoral commission.

Small groups of people have also been walking into the centre, some out of curiosity others to check if their names are in the voting register which has been displayed on the school’s main gate.

“I can’t see my name, but I’m determined to find it,” one man, who said he was a mechanic and would be voting for the fifth time, told me as he ran his finger down the list.

Several people I spoke to said they were looking forward to the elections, and most of them said the state of the economy was their number one issue. 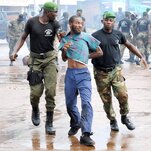