Nearly 600,000 vaccines administered as at Wednesday

Nearly 600,000 vaccines administered as at Wednesday

A little over a month after Ghana began the mass vaccination of a section of the population against Covid-19, almost the 600,000 jabs received from the Serum Institute of India have been administered.

As of Wednesday, April 7, approximately 599,128 vaccines have been administered, according to the Ghana Health Service.

The country became the first in the world to receive the AstraZeneca vaccines under the COVAX facility in February.

It began vaccinating health workers, religious leaders, security officers and other frontline workers from Tuesday, March 2, a week after it took delivery of 600,000 vaccines from India.

The country received an additional 50,000 from the Indian government.

Last week, a Fellow at the Centre for Social Justice, Dr William Menson, pointed out that the number of people targeted in the first vaccination exercise is woefully inadequate.

“The ongoing vaccination gave us a lot of promises with respect to the kind of outcome we want but then the number of people vaccinated, 600,000, is really a drop in  the ocean looking at our population because the aim of this vaccination is for us to reach a certain critical mass, a certain critical proportion that will give us the herd immunity,” he observed on First Take on 3FM on Monday, March 29.

So far, the country has recorded a total of 91,009 cases of the coronavirus infections with 88,810 recovered and discharged.

Over 750 deaths have been recorded since the outbreak of the disease in the country a year ago. 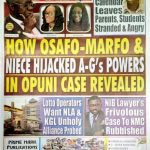 Over 700k vaccines dispensed in Ghana